In conjunction with the U.S. diplomatic delegation arriving in Cuba on Wednesday for talks with the Communist regime, ABC’s World News Tonight with David Muir and NBC Nightly News went out of their way to all but again ignore the brutal past of the Castro government  and instead stage unapologetic promotions of the country that lies 93 miles to America’s south.

On NBC, anchor Brian Williams and chief foreign affairs correspondent Andrea Mitchell led the way, with the two being rather giddy over the occasion. Williams started off by proclaiming that Wednesday was a “turning point here in Havana” as “[a] new era begins” with “a lot of history” having changed the moment that delegation’s commercial flight landed.

Mitchell added in her segment that the two sides have “a lot of history to overcome,” spanning from the Cuban revolution to the Elian Gonzalez affair in 1999. Upon the conclusion of her piece, she remarked to Williams that the whole experience has been “pretty cool.”

Willams then fretted how, upon arrival, he was unable to take a photo when deboarding the plane to document the moment as he was the third American to leave the plane. He also gushed that: “All I know is we witnessed something here today after a long night’s journey that started when the President finished last night in Washington.”

NBC Nightly News followed up with two more segments with one being an interview with a freelance producer in Cuba. At one point, Williams asked the woman: “When Americans are here and planes and hotels and the cars are 2015 cars and not 1958 cars, what happens to the revolution?”

To conclude the program, another segment provided a two-minute-and-17-second tour of the extremely wealthy and exclusive Varadero Beach, which is located 90 miles from Havana. Williams described it as “one of the more spectacular beaches here” and containing “a spectacular view very few Americans have ever seen because they haven't been allowed to until now.”

Over on ABC, anchor David Muir and correspondent Jim Avila reported from Havana, with Muir embarking on a thorough tour of the city (as many other network correspondents have already done). To Muir’s credit, he did (albeit briefly) mention the extreme poverty by visiting a Cuban grocery store and noting how Cubans, on average, make $20 a month.

Following previous stories from Cuba, Avila reported on the presence of a Russian spy ship in Havana’s port and whether or not that it was a coincidence. Near the end of his piece, he found time to joke with Muir about the real reason the Russian ship was in port because “in Cuba, here in Havana, rum costs about 80 cents a shot.”

Muir had another story at the show’s conclusion from the city’s streets with this one including a discussion with Cuban schoolchildren and putting a price tag on the 1950s-era American cars that still roam the country.

In stark contrast to ABC and NBC, the CBS Evening News with Scott Pelley devoted one segment to the talks and instead focused on the plight of Cubans still looking to come to America to start better lives, even in the midst of the promises that life will improve on the island now that relations with the U.S. are changing.

Correspondent Manuel Bojorquez interviewed a couple who were building a boat inside their home in what was their third attempt to sail to reach the United States. The couple cited how they and their four children have “been marked ever since” the mother (named Nancy) “joined a dissident group in 2008” and thus unable to find work in the country.

While CBS was a rare voice of reason and fair reporting on Wednesday, this fawning over Cuba and refusal to acknowledge the totalitarian nature of the Cuban government (besides a few fleeting references) seems poised to continue.

The transcript of the segment that aired on the CBS Evening News with Scott Pelley on January 21 can be found below. 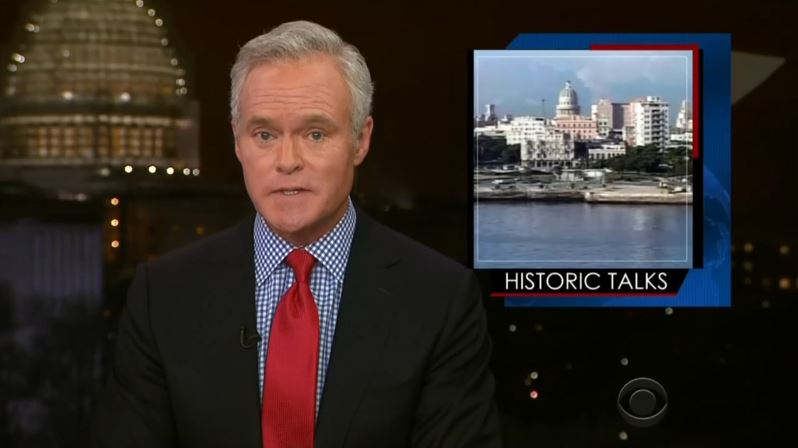 SCOTT PELLEY: Historic talks between the United States and Cuba got off to a rough start today when the U.S. refused to change its policy that gives Cuban refugees here automatic legal residency. Some Cubans worry that if the rules change, they'll get stuck where they are. Manuel Bojorquez is in Havana.

MANUEL BOJORQUEZ: Inside their tiny living room, Nancy and Alexi showed us their big secret: The boat they are building to flee Cuba. [TO NANCY AND ALEXI] How long have you bee working on this? [NANCY SPEAKING SPANISH] Two months. Nancy told us work is slow. Parts are bought on the black market and some of the wood comes from a coffin maker. When it's complete, Nancy, her husband, and four children, will attempt to cross more than 90 miles to the U.S. and a new future. Nancy says her family has been marked ever since she joined a dissident group in 2008. “What do we do,” she says. “How I do support my children? My daughter can't work. My son can't work, either, because this country doesn't have jobs for them.” Like many others, they are also driven by fear that the favored status for Cuban refugees that lets anyone stay who reaches U.S. shores may disappear as the two nations reestablish relations. More than 370,000 Cubans have left for the U.S. over the past decade. Last month, the U.S. Coast Guard captured or turned away 481 Cubans, nearly twice as many as the year before. Both nations have worked to ensure legal migration, with the U.S. issuing at least 20,000 visas to Cubans per year, but Nancy says her family has been turned down. This will be their third attempt to escape by boat. [TO NANCY] You'll keep trying. And that's why at today's migration talks the Cuban government once again blamed U.S. policy for encouraging people to leave the island illegally, but, Scott, a U.S. official in Havana today said Washington remains committed to its current approach.