During Wednesday’s NBC Nightly News, correspondent Mark Potter reported from Havana, Cuba on the news that President Obama was altering U.S. relations with the communist state and parroted a long-standing liberal argument as to why Cuba’s economy has struggled for over half a century.

Speaking about the regime of Fidel and Raul Castro, Potter chose not to blame the policies of the Castros, but those of the United States in why the island nation has suffered economically: “His revolution is showing its age too and Havana, known for its charm and vintage cars, is on life support, its economy crippled by the long-standing U.S. Embargo. People here now hope that will change.” [MP3 audio here; Video below]

What Potter neglected to point out is that Cuba has been able to freely engage in trade with a whole host of countries and has, with China, Spain, Belgium, and Italy being just a few examples. Despite a U.S. embargo, Cuba has been able to trade on cars, food, sugar, tobacco, oil, and more with other countries in addition to having been a part of the World Trade Organization (WTO) since 1995.

With those things in mind, what Potter could have alluded to was that Cuba’s economy has long been “crippled” because they’ve lived under a brutal, communist regime for 55 years that prohibits the freedoms of speech and enterprise that has allowed countries across western and central Europe as well as the United States to succeed and for as long as they have

The complete transcript of the segment that aired on NBC Nightly News on December 17 is transcribed below.

BRIAN WILLIAMS: Now to the reaction to all of this in Cuba. NBC's Mark Potter is there for us tonight. Mark, good evening. 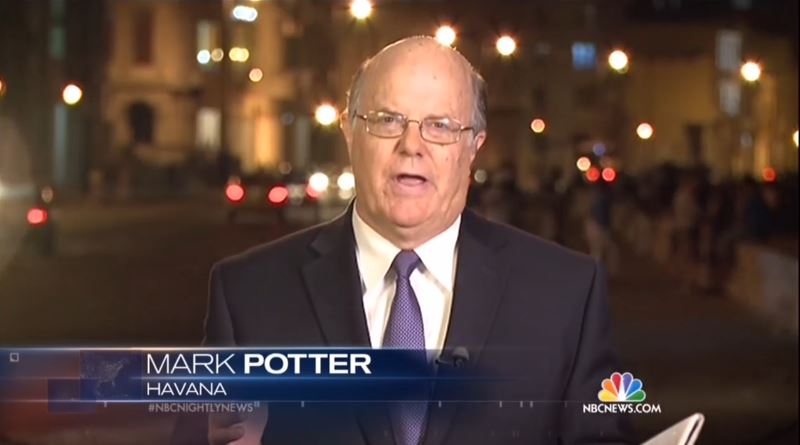 MARK POTTER: Good evening, Brian. Here on Cuban streets, the announcement in Washington and Havana has been met with great excitement. This is something the Cuban people have wanted for years – better relations with their powerful neighbor to the north, hoping it would dramatically improve their lives. Cubans welcomed today's news, overjoyed that the three Cuban agents held by the U.S. will be coming home. They're national heroes here, but it is much more than that. People watching today's announcement saw a chance for Cuba and the United States, bitter enemies for decades, to become friends. “We are very happy,” this man says. “We've been waiting many years for this.” More than 50 years, in fact. Fidel Castro swept to power at the height of the Cold War, but he's 88 now, last seen publicly in July in failing health. His revolution is showing its age too and Havana, known for its charm and vintage cars, is on life support, its economy crippled by the long-standing U.S. Embargo. People here now hope that will change. “Let's see if the embargo can be lifted so our quality of life can improve so we can get more food, more things from other countries,” this man says. The potential for U.S. economic investment here is enormous. Even Cuba's famous cigars, now restricted in the U.S., could see a booming market. If travel restrictions are lifted, millions more American tourists could visit this Caribbean island nation so close to the United States and many Cubans and Cuban-Americans, friends and relatives, could soon be reunited, much freer than now to travel between the two countries. That would be a revolution and over the years, the Cuban people have been through many ups and downs in U.S./Cuban relations, and many worry here if these changes will actually occur, but many others believe they are much closer today than they have been for decades. Brian?

WILLIAMS: Our thanks to Mark Potter in Havana for us tonight. Mark, thanks.