CBS News congressional correspondent Nancy Cordes profiled the North Carolina Senate race during Wednesday night’s CBS Evening News with Scott Pelley and devoted much of her report highlighting the fact that the race between incumbent Democratic Senator Kay Hagan and Republican challenger and State House Speaker Thom Tillis has become the most expensive Senate race of the cycle.

Specifically, Cordes blamed the Supreme Court as it “paved the way for unlimited outside spending in a 2010 decision commonly known as Citizens United, which overturned parts of a campaign finance law authored by Republican John McCain.” [MP3 audio here; Video below]

Anchor Scott Pelley pointed out in introducing Cordes’s story that the “battle has topped $100 million” and stands as one of the "six seats now held by Democrats" that "Republicans are hoping to win to take back the Senate."

Cordes reported that after “Senator Hagan became the target of conservative ads a full year ago” and soon after, “Democratic groups rushed in to even the score.”

While there’s no denying $100 million is a great deal of money, what Cordes’s story and many who complain about spending on advertisements (online or on television) is that they are becoming the most popular way to target voters (with both positive and negative messaging) as fewer and fewer people use phone conversations as a method of communicating with each other in the age of cellphones, social media, and text messaging.

Other factors in this particular race include the fact that, after voting for President Obama in 2008, North Carolina has become a more right-leaning state as well as viewed as an opportunity for Republicans to unseat a Democrat on the path to a Senate majority.

Additionally, the major broadcast networks have done little to lessen the need for advertising as they themselves have said next to nothing (until now) about these major Senate races or the midterm elections.

As a Media Research Center study found, the networks of ABC, CBS, and NBC have all but buried any mention of the midterms in their evening newscasts compared to the 2006 midterms when Democrats swept both the House and Senate.

The complete transcript of the segment that aired on October 29's CBS Evening News with Scott Pelley can be found below. 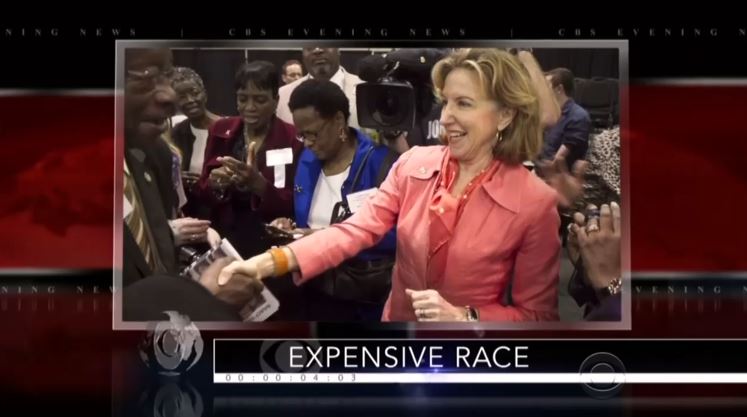 SCOTT PELLEY: We'll take you next to the state with the most expensive congressional race in the country to see what all that money is buying. 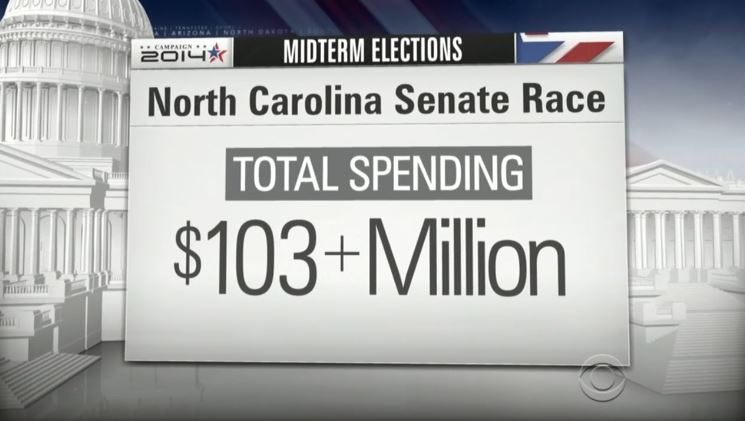 PELLEY: We're down to six days now until election day. The Republicans are hoping to win back the Senate by taking six seats now held by Democrats. One of those seats is in North Carolina, and the price tag in that battle has topped $100 million. Nancy Cordes tells us about the most expensive race in the most expensive congressional election ever.

NANCY CORDES: Democrat Kay Hagan and Republican Thom Tillis are all smiles on the stump.

ANTI-HAGAN AD NARRATOR: And Hagan has voted to raise the debt ceiling by...

CORDES: Two-thirds of them were paid for by outside groups.

CORDES: As a Democrat in a battleground state, Senator Hagan became the target of conservative ads a full year ago. Democratic groups rushed in to even the score.

CORDES: [TO HAGAN] Did you ever considered asking groups that support you to stand down?

HAGAN: You know, I wish we had together would have said no outside money and I tell ya, I think it would have been a different day.

CORDES: The Supreme Court paved the way for unlimited outside spending in a 2010 decision commonly known as Citizens United, which overturned parts of a campaign finance law authored by Republican John McCain, who we caught up with at an event for Tillis in Charlotte. [TO MCCAIN] At this point, is there any way to put the genie back in the bottle?

ARIZONA REPUBLICAN SENATOR JOHN MCCAIN: Not until there is a scandal. I’m sorry to tell you that. There doesn't seem to be the interest. Both sides enjoy having all this money.

CORDES: But Tillis, who is Speaker of the State House, says all that money drowns out his message. 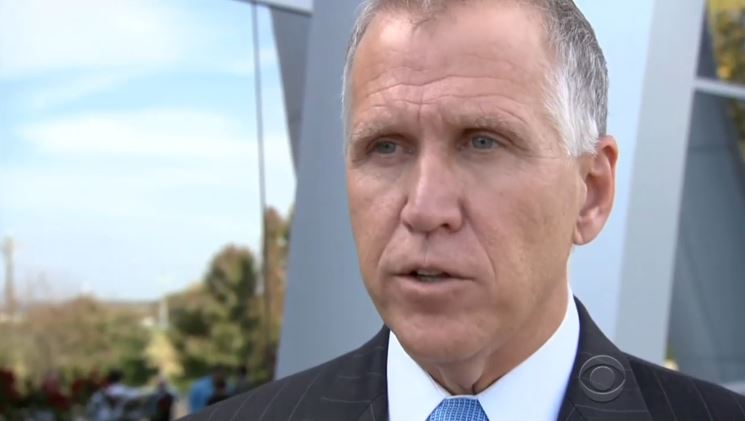 TILLIS: I hope that most of the voters will go out, take a look at the real issues, what I stand for, what I’ve done in North Carolina and what Senator Hagan has failed to do in Washington.

CORDES: The irony is that, despite all that spending, the polls here have barely budged. According to the CBS News battleground tracker, Scott, Tillis had a one-point lead over the summer while Hagan leads by three points today.

PELLEY: Nancy Cordes in Raleigh for us tonight.