Outfront host Erin Burnett hosted the program in prime time and asked plenty of easy questions, including asking Clinton how he will “baby-proof the White House” with their daughter Chelsea’s pending birth to her first child and the assumption that Hillary Clinton will become President after the 2016 presidential election. [MP3 audio here; Video below]

At the beginning of the program, Burnett gushed how Clinton “challenged people around the nation and the world” at the organization’s first meeting in 2005 by saying: “I think that all of us have an unprecedented amount of power to solve problems, save lives and help people see the future.”

She then wondered if “10 years later, can that vision be fulfilled” and officially welcomed Clinton to the program. After questions about the threat of the Islamic terrorist group ISIS, President Obama’s speech to the United Nations (U.N.) Generally Assembly, and race relations in America, Burnett went back to promoting CGI and the Clintons: “In 2005, President Clinton established the Clinton Global Initiative. Over the past 10 years, CGI says, it has touched the lives of more than 400 million people around the world.” 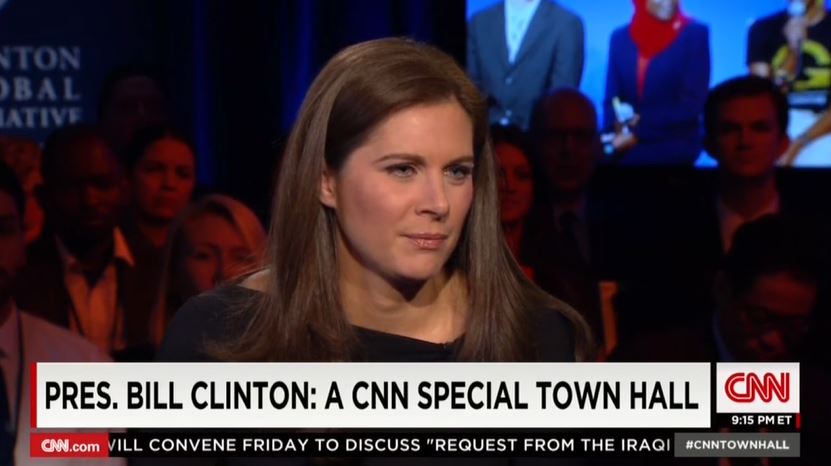 Next, the CNN host asked the former President what was “the thing that you are most proud of that you have done” with CGI considering “you have spent years trying to make a difference get people to work together” and “[n]ow that you have 10 years to look back” upon.

Burnett adoration for CGI continued as she remarked that, one day, she happened to have been reading a catalogue for a furniture company that turned out to be one of CGI’s sponsors and found the company “very interesting” as they “were publicly very proud of it.” Going off of that, she wondered how exactly Clinton “measures” CGI’s success and use of monetary donations from companies such as this furniture company.

With photos of CGI speeches and events over the years as a backdrop in addition to a small audience gathered around them, Cisco CEO and the Queen Consort of Jordan joined Clinton and Burnett in the center and she again gushed at CGI’s success while showing a photo of a panel with the Queen and Clinton in 2005:

The topic then moved to how Bill and Hillary Clinton are about to become grandparents and so the Clinton infomercial dragged on with this exchange between the host and former President: 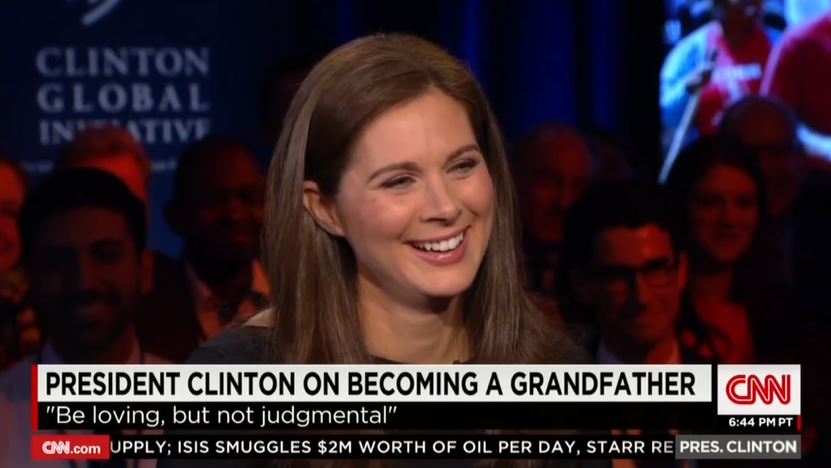 BURNETT: You know, before this all started -- I mean, your mom and I know you're about to have new one in your family and of course I had to show the President a video of my little guy.

BURNETT: And I was thinking, you know, I haven't baby proofed my apartment yet, which is some sort of child abuse. I'm sure, he's 10- months old I haven't done to get. You have a big project ahead of you, cause you’re going to have to baby-proof the White House. [LAUGHTER] Are you ready for that? I mean, you've got the –

CLINTON: I just want to live to be a grandfather, that's been my goal for several years now – one thing at a time.

Just when the baby discussion and Clinton becoming a grandparents seemed to be over, actor and liberal activist Matt Damon asked Clinton a question about achieving global access to clean water and bathrooms, but also inserted an unrelated question: “[A]re you excited to be a grandparent?”

At that point, the audience laughed and giggled as Clinton said that: “I’m excited” and “out of control” as he has been telling himself everyday that: “[Y]ou have to remember whose child this is. Do not interfere. Be there when you're welcome. Be loving but not judgmental. I got – I mean, I'm trying to train myself.”

This hour-long devotion to the 42nd President on CNN was not the first one that celebrated the Clinton family. Back when former Secretary of State Hillary Clinton released a new book back in June, CNN’s Christiane Amanpour asked five questions from a liberal perspective and only one from a more right perspective.

In addition, Mrs. Clinton’s “town hall” included a stage director who had the audience add “energy” to the room by, according to the Media Research Center’s Tim Graham, “applaud Mrs. Clinton, which they did with great vigor, especially when Christiane Amanpour raised the prospect of Hillary running for president.”