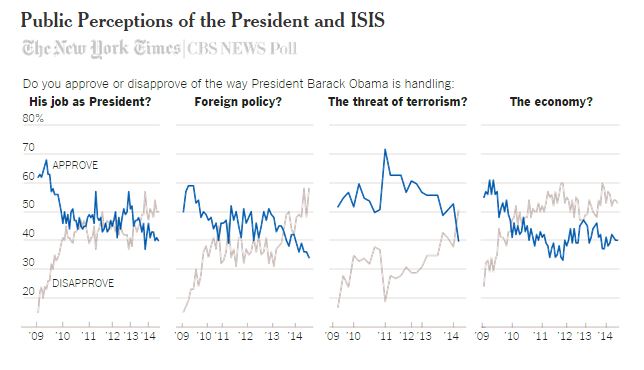 In contrast, the front-page New York Times article by Julie Hirschfeld Davis and Dalia Sussman included dire statistics about the President’s low domestic approval rating: “The results suggest a profoundly unsettled public mood, with two-thirds of Americans surveyed saying the country is on the wrong track and half disapproving of how Mr. Obama is doing his job, a negative assessment that threatens to be a substantial drag on Democrats in November."

CBS This Morning only mentioned the poll to highlight broad support for U.S. air strikes against the Islamic terrorist group ISIS but opposition to U.S. ground troops.

During an interview with the U.S. Ambassador to the United Nations Samatha Power, the program briefly flashed in an on-screen graphic that 58 percent of Americans said in the poll that they believed ISIS poses a major threat to the U.S.

Unlike CBS, the Times noted how the President’s low ratings matched those of President Bush during his sixth year in office in 2006 when the Democrats swept both the House and Senate in the November midterm elections:

The poll numbers present a steep climb for the president as he seeks to rally public support for the effort against the Islamic State, just as Democrats are seeking ways to motivate their core supporters, who include antiwar voters. Mr. Obama’s job approval ratings are strikingly similar to those of George W. Bush at the same point in his second term in office in 2006, when Americans’ war fatigue helped Democrats sweep both houses of Congress in what Mr. Bush later called “a thumping.”

Previously, I reported how both CBS This Morning and the CBS Evening News with Scott Pelley omitted any mention of those key results in the poll on Wednesday besides mention of "how 57 percent of Americans do not feel as though the President is being tough enough in dealing with the threat posed" by ISIS and Obama's approval/disapproval rating on terrorism.

The inability of CBS to even discuss President Obama’s poor job approval ratings were documented further in a recent study by the Media Research Center’s Rich Noyes, in which he found that CBS and fellow broadcasters ABC and NBC published only 2 stories from January 1 to August 31, 2014 that mentioned polls critical of President Obama.

However, when it came to reporting on polls showing low approval for then-President Bush during the same time period in 2006, the three major broadcast networks ran 52 stories.

The relevant portion of the transcript from CBS This Morning on September 18 can be found below. 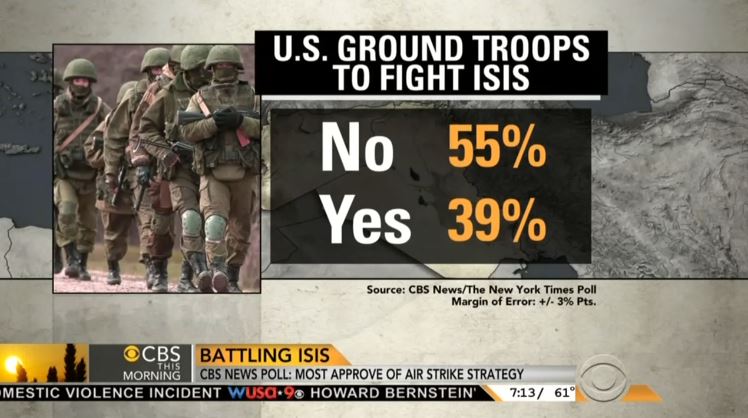