UPDATE (9/18, 5:38 p.m. Eastern): On Thursday, the print edition of The New York Times finally covered the results of its own poll with CBS News that documented poor ratings for President Obama on overall job approval and foreign policy with a front-page article detailing the poll results. It also highlighted the similarities between President Bush's poll ratings in September 2006 and President Obama's now in September 2014. To read more, please see my story here (which was posted on early Thursday evening).

On Wednesday, CBS and The New York Times made the point of omitting results from their own poll which show President Obama’s job approval at 40 percent and his approval on foreign policy at only 34 percent from the newscasts and print newspaper, respectively.

CBS This Morning and the CBS Evening News with Scott Pelley only mentioned the latest CBS News/New York Times poll in regards to how 57 percent of Americans do not feel as though the President is being tough enough in dealing with the threat posed by the Islamic terrorist group ISIS. At the other end of the spectrum, only 31 percent of those asked said they approved of his handling of ISIS.

Both programs also cited Obama’s approval/disapproval rating on terrorism, but then moved on discussing proceedings on Capitol Hill from Tuesday about ISIS on CBS This Morning and criticism of the Obama administration from former Secretary of Defense Robert Gates on the CBS Evening News with Scott Pelley.

On CBS This Morning, total air time on the poll was a scant 21 seconds while the CBS Evening News with Scott Pelley mentioned the President’s unfavorable poll numbers on ISIS and terrorism for 27 seconds.

The print edition of The New York Times on Wednesday provided no coverage of the poll despite a story being published on the paper’s website dated on Tuesday. The article, entitled “G.O.P Gains Strength and Obama Gets Low Marks, Poll Finds,” detailed how “President Obama’s approval ratings are similar to those of President George W. Bush in 2006 when Democrats swept both houses of Congress in the midterm elections.”

Further, the article did mention President Obama’s 40 percent overall approval rating and mentioned that his overall foreign policy rating of merely 34 percent is a new record-low for him in that poll and his 41 percent approval rating on terrorism is both his personal worst and “significantly lower than” where President Bush stood in September 2006.

Similarly, CBS News relegated further details about the poll to its website and an article dated at 7:00 a.m. Eastern on Wednesday, including the comparison of Bush in 2006 and Obama in 2014.

Despite that statement comparing polling numbers of Bush and Obama, CBS News continues to provide cover for the Obama administration. As the Media Research Center’s Rich Noyes documented in a study published on September 8:

[P]olling news has practically vanished from the Big Three evening newscasts in 2014 as President Obama’s approval ratings have tumbled and the public opposes defining administration policies like ObamaCare.

With thanks to my colleague Jeffrey Meyer, the relevant portion of the transcript that aired on September 17's CBS This Morning can be found below. 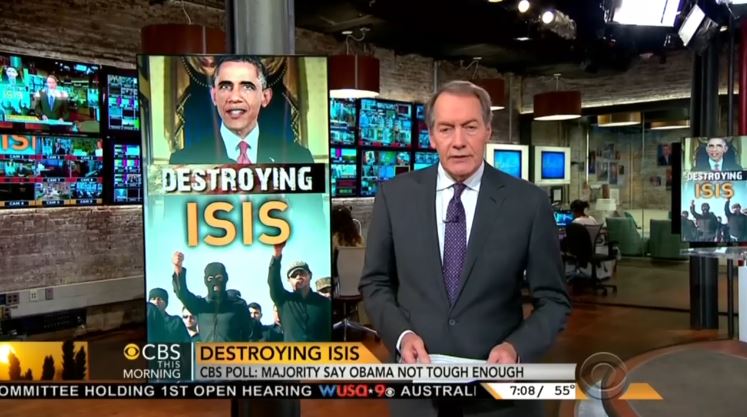 CHARLIE ROSE: A CBS News/New York Times poll out this morning shows 57% of Americans do not think the president is being tough enough with ISIS. 41% approve of the way he is handling terrorism. That’s a new low for this poll. In May of 2011 after Osama Bin Laden was killed, 72% approved of the president’s handling of terrorism.

The relevant portion of the transcript discussing the CBS News/New York Times poll on the CBS Evening News with Scott Pelley on September 17 is transcribed below. 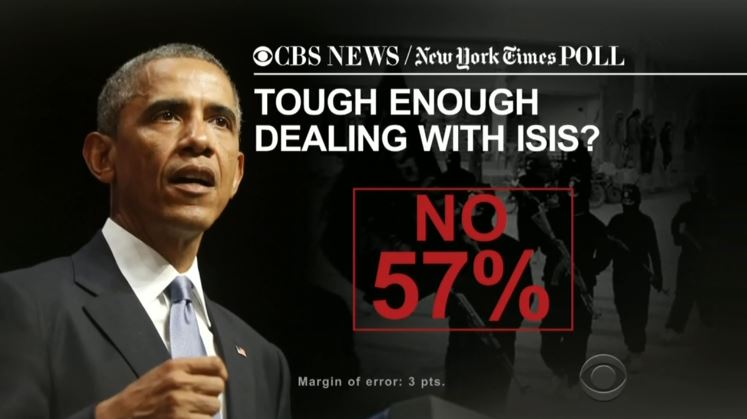 MAJOR GARRETT: Confidence in the President's leadership as Commander in Chief has never been lower. A new CBS News/New York Times poll found 57% of the country believes Mr. Obama has not been tough enough in dealing with ISIS. When it comes to fighting terrorism overall, only 41% approve of the President's performance. 50% disapprove, a steep decline from the 72% approval he had after the killing of Osama Bin Laden in May 2011.