Leftists are in a rage-filled frenzy over abortion – enough to attempt to harass Justice Kavanaugh while he was eating dinner in Washington (not to mention trying to assassinate him). And failed democratic presidential candidate turned Transportation Secretary Pete Buttigieg doesn’t seem to have a problem with it, as he defended the hecklers' actions according to an article by Salon published July 11.

On July 8 protestors swarmed outside of Morton’s in downtown DC, where Kavanaugh was eating dinner, to voice their outrage over the Dobbs verdict. Left-wing activists forced Kavanaugh to abandon his dinner and escape through the back of the restaurant with his security detail. The incident was rightly condemned by the restaurant. 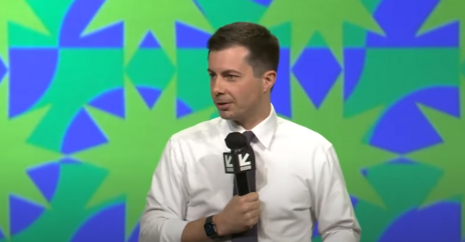 Pete Buttigieg seems to be okay with public harassment and stalking of Supreme Court justices, saying per Salon, “Remember, the justice never even came into contact with these protesters, reportedly didn't see or hear them…And these protesters are upset because a right, an important right that the majority of Americans support was taken away."

Right. Just because someone attempted to take Kavanaugh’s life in the wake of Dobbs doesn’t mean Democrats should try to lower their supporters’ temperature.

And Buttigieg has tacitly encouraged more angry liberals to mob him. He added, “And that [Roe] has now been thrown out the window by justices, including Justice Kavanaugh who I recall swore up and down in front of God and everyone including United States Congress that they were going to leave settled case law alone.” (He didn’t.)

The contempt is palpable, and Secretary Maternity Leave knows exactly what he’s doing when he gives a handwave excuse to these protestors. Kavanaugh’s life is in danger from left-wing radicals, and a Biden cabinet appointee does not need to rouse the masses more.