Early this morning, a man was arrested after carrying at least two weapons near Brett Kavanaugh’s Maryland home with an attempt to kill the judge. Kavanaugh has been under the scrutiny of the left as of late due to his pro-life views amid the U.S. Supreme Court pending Roe v. Wade decision. 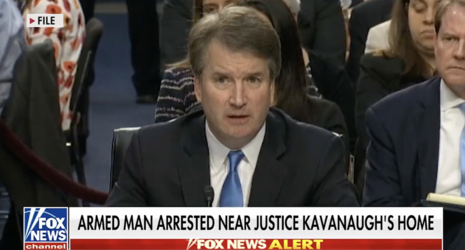 Reports indicate that the man was in his mid 20’s and began roaming Kavanaugh's Maryland house in the middle of the night.  He was carrying a gun, a knife and burglary tools, according to Fox.

The suspect had reportedly made violent threats to Kavanaugh previously.

Police arrived at the scene and stopped the man before he reached Kavanaughs home. The armed man was arrested, just hours before the U.S. The Supreme Court was scheduled to release more rulings as it’s in the final weeks of its annual season. According to Fox News, the Supreme Court announced that they were not going to release the verdict for Dobbs v. Jackson Women's Health Organization, "prolonging the wait for its opinion which is expected to overturn Roe v. Wade."

The man was transported to Montgomery County Police 2nd District and told law enforcement that he wanted to kill Kavanaugh, according to Washington Post.

There has been a myriad of threats against the current Supreme Court Justices — well, the ones who voted to overturn Roe v. Wade, throughout the past month. On May 7, protestors stood outside Kavanaugh's house chanting “we will not go back.” On May 10, protestors marched to Justice Samuel Alito’s house as well. Alito is the justice who wrote the draft opinion that was leaked May 2. On May 19, protestors lined up at Amy Coney Barrett’s home screaming “Ruth Sent Us” referring to late Ruth Bader Ginsberg who was admittedly supportive of abortion.

US Attorney General Merrick Garland spoke on the attack Wednesday at noon and admitted that these violent acts "strike at the heart of our democracy." Last month he directed the U.S. Marshals Service to provide additional support to the court's existing police force. He wants to "ensure every degree of protection available as possible."

This story is breaking and is likely to be updated.