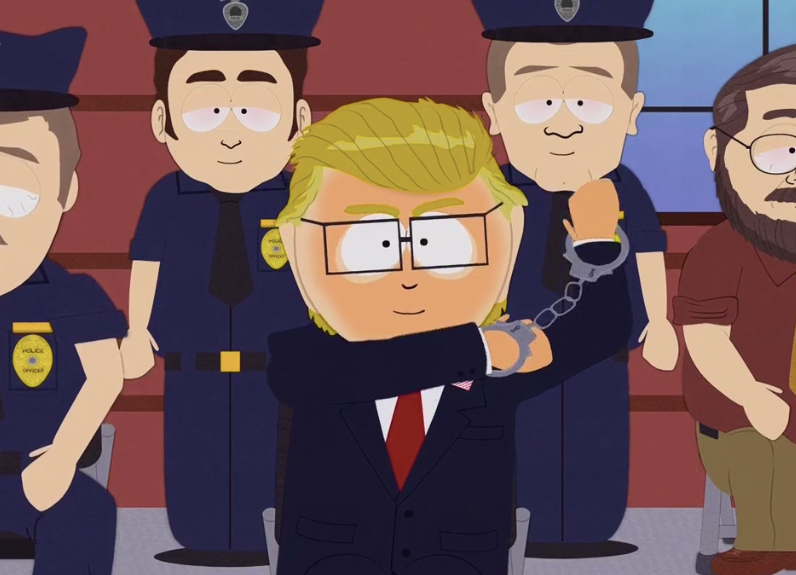 South Park decided to go after President Donald Trump in a subtle yet notable manner in the season 22 finale, titled “Bike Parade,” which aired on Wednesday night.

Although the episode focused on unhappy workers in South Park after Amazon decided to place its latest fulfillment center in the town, the show decided to insert a brief attack on President Trump in the process. During a bike parade at the end of the episode, Mr. Garrison, a former teacher at South Park Elementary School who ran for president as a Trump parody back in 2016 on the show, could be seen in handcuffs waving, watching the event from the sidewalk outside the station surrounded by police officers. No further explanation is given.

Of course, the allusion here is that South Park is saying President Trump will end up behind bars because if they were supporting him, clearly they would not have done it. Instead, they would rather act outlandishly and do what they can for ratings--even if that means showing the president locked up when there is no reason to do so. After all, special counsel Robert Mueller’s investigation has yet to come up with any hard evidence of the president committing any crime. However, Hollywood does not seem to care because that does not fit their political agenda.

South Park has never really shown President Trump in a positive light, so what they did Wednesday was not all that surprising. Last year, they claimed that the president was “very desperate” and “scaring children”. They also essentially begged him to tweet less because they thought it was creating conflicts on the international stage. Plus, back in 2016, the show at least admitted that politically correct culture was the reason that President Trump was elected that year.

Week by week, it seems as though South Park is becoming more difficult to pin from a political perspective. While the show may mock PC culture and the show’s creators Matt Stone and Trey Parker claim to be Republicans, they have also shown left-wing inclinations. These include supporting climate change (and saying “Al Gore was right”), not showing support for President Trump and their constant mocking of religion.

Once again, all this shows is South Park really is not anyone’s political ally. Just as the right begins to appreciate an episode in which they agree with the message, their side is almost immediately hit right back with criticisms via the show. This is to be expected at this point with the show seemingly flipping allegiances on a weekly basis.