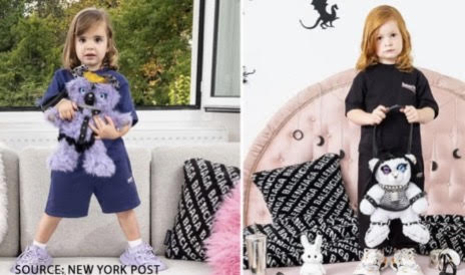 If you were looking for any more proof that childhood is under attack, here it is.

The luxury shoe brand Balenciaga recently shared images from a photo shoot to advertise the company. Images included young girls holding teddy bears that had bondage gear on them.

Yup. You read that correctly. Little girls were handed plush toys with black leather collars, fishnets, chains, chokers, and straps to advertise Balenciaga’s new products. Verified Twitter user, “Shoe” tweeted images of the website, which has since been scrubbed.

Looks like the case mentioned in the slip opinion is Ashcroft v Free Speech Coalition. Although the full case name is obscured by other paper, in context that citation would make sense. pic.twitter.com/n1Of1CI9o2

The American Conservative commented on the situation regarding Balenciaga’s intentionality with the advertisement.

Thing is, if Balenciaga's ad director hadn't overegged the pudding by putting in the Ashcroft ruling, tipping us off to the fact that they know exactly what they are doing here, most of us would have just passed this on by as yet one more predictable example of the degeneration of our culture at the hands of corrupt elites, who are taking pleasure in seeing just how far they can go.

Whoever approved this ad is wildly disturbing.

Uncoincidentally, the Balenciaga brand Twitter page was deleted following Elon Musk’s takeover. Musk reaffirmed that Twitter would not allow things like "child exploitation," and since that’s now Balenciaga’s focus, the brand left the platform.  Balenciaga also deleted all of its Instagram posts.

Was this like a “no publicity is bad publicity” type scheme on the brand’s part or did it actually take and release these images thinking that they were a good idea?

The pedo bear advertisement is a sick and twisted attempt at attention-seeking but, given the left's relentless sexualization of kids, I can’t say this is surprising.