Where’s his dementia when we need it? 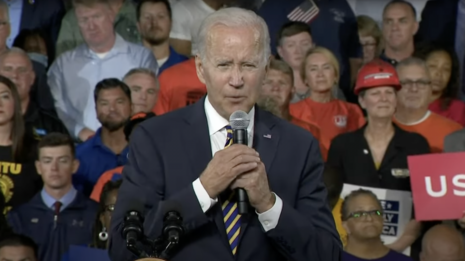 At a time when states across the nation are passing and enacting pro-life legislature to help save babies, our "devout Catholic" president is taking a different stance. Joe Biden is expected to sign an “Executive Order Protecting Access to Reproductive Health Care Services” Friday to expand access to abortion, according to Politico.

Biden plans to direct his health department to “expand abortion pills, beef up enforcement of Obamacare’s birth control coverage mandate and organize a cadre of pro bono lawyers to help defend people criminally charged for seeking or providing the procedure.”

The administration is supposedly also looking into digital app privacy rights for abortion seekers so that women can have abortions without getting in trouble.

The White House isn’t satisfied with even those measures however, and claimed “that the only way to secure a woman’s right to choose is for Congress to restore the protections of Roe as federal law.”

The administration stated that the overturning of Roe v. Wade “eliminated a woman’s Constitutional right to choose.” This statement couldn’t be more inaccurate. A woman’s choice comes before a baby is present, when she engages in sexual intercourse. Not to mention, nobody should have a “right” to “choose” to kill something they don’t want to deal with. If that were the case, my street would have a lot less annoying people on it.

According to the July 8 White House fact sheet preview of the Executive Order, Biden plans to initiate four measures to “defend reproductive rights”:

It has become overwhelmingly apparent that Biden does not care about the lives of the most vulnerable in our society. For someone who is personally opposed to abortion, Biden sure does promote the heck out of it.

Pro-Life leaders and groups across the nation are in opposition of Biden’s baby killing regime.

Long gone is the Democratic Party of ‘safe, legal, and rare.’ President Biden has once again caved to the extreme abortion lobby, determined to put the full weight of the federal government behind promoting abortion. Democrats will stop at nothing to promote their agenda of abortion on demand, up until the moment of birth, paid for by the taxpayers – including dangerous mail-order abortion drugs — even if it means gutting the long-standing filibuster, increasing the size of the Supreme Court, or putting abortionists in tents in national parks.

Students For Life Action are not looking forward to Biden’s Executive Order.

Watching for President Biden's Executive Order on Abortion today like... 😡👀🙄

What to expect:
- Undermine states rights to protect the vulnerable
- Push dangerous Abortion Pills on women
- Ignore the majority who want to vote on abortion

It is tragic that this administration is using its power to push for more and more painful abortions which harm women and take innocent lives.

Biden has denied the religion that he claims to be devoutly committed to in order to bow down to the disgusting pro-abortionist narrative. The Supreme Court must mean nothing to Biden for him to completely deny its recent Dobbs decision. Biden doesn’t want a democracy. He want’s a communist regime and this Executive Order yet again proves that.

Hopefully Biden’s dementia will kick in and he’ll forget to sign the order.