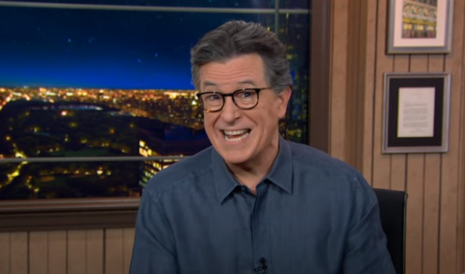 Comedian Stephen Colbert is not only full of jokes … he also IS a joke.

On Tuesday’s episode of The Late Show, Colbert spoke about “gun apologists." Without skipping a beat, Colbert used the gun related tragedies this past week to lambaste Republicans.

He started the skit with a sorrowful lament on the Atlanta and Boulder shootings this week that left a total of 18 people dead (eight in Atlanta and ten in Boulder). “Yesterday was another grim day for America,” he said to open. “This story is unspeakably tragic” and the “only suitable way to honor these victims is with action but our government continues to do nothing.

Per Colbert fashion, he used the shootings as a way to bash political figures … unsurprisingly, though, only Republicans.

Colbert called out “gun fetishist” Congresswoman Lauren Boebert (R-CO) and sarcastically emoted her tone in a recent Tweet. His monologue throughout the scene continued as a mockery.

"Where does she find the courage?” Colbert asked. “‘Senseless acts of violence are never OK,’ implying, of course, that intentional violence is fine. You know, the kind her buddies plan on Parler.” Someone needs to turn off his mic.

He also went on to bash Senator John Kennedy (R-LA) who offered a “dollop of distraction” and “folksy BS” when speaking at the Senate hearing on gun violence. Kennedy brought up another issue that needs addressing (drunk drivers) and Colbert came back with a “Let's regulate guns the way we regulate alcohol and cars. You got to be 21, got to pass a test to get a license, you got to have registration and insurance for your gun.” Colbert’s dramatic solution was to vote Kennedy out of office. And for what? For bringing up legitimate issues?

If these Republicans are spewing “BS” then what the heck does Colbert think he’s spewing?

“Oh, we definitely have an idiot control problem,” Colbert added. Finally! Something we agree on! We do have an idiot problem, Colbert … it’s YOU!

Colbert said, “Evidently, the only solution for America’s gun violence is to put us all under house arrest” … nah … maybe just you, Colbert.