Pandora’s box was mythically known as the container that unleashed all the immoralities and sufferings that plague the universe today. But Ron Perlman thinks they've been unleashed by President Trump. 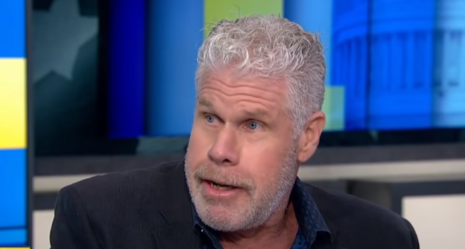 Yesterday, the actor tweeted that “Everything that is ugly about our entire history is represented in Donald John Trump. His ugliness is seeping up from the ground around us like bad sewage. Prison is too good for this piece of shit.”

Yes, obviously Trump’s presidency embodies the Jim Crow laws that were present in the first half of the 20th century, the incarceration of Japanese-Americans for their skin color, the evilness of the Ku Klux Klan, the slavery of the pre-Civil War days, the atrocious labor conditions in the late 1800s, and the rampant anti-Catholicism that is still prevalent today.

Aside from the laughable historical inaccuracy of Perlman's statement, what crime could Trump be thrown in prison for, anyway? Offending Hollywood?

In another rant on twitter on September 23, Perlman said, “Did you get off on those Salem Witch Trials? Big fan of Isis? Long for the days of slavery and when women were barefoot and pregnant in the kitchen? Then vote republican on November 3!”

Which is a funny statement to make, considering Trump pardoned renowned suffragist Susan B. Anthony earlier this year. And didn’t the fall of the last ISIS stronghold take place during his presidency?

A little bit over a week ago, Perlman tweeted, “If you really study the name Trump carefully you can’t help noticing it really says cunt.”

Yeah, and Joe Biden is losing his marbles. But c*nts can always become decent people.

Two weeks ago, Perlman tweeted, “Some of you are about to vote for a man who not only allowed, but actually took part in the deaths of 200,000 of his countrymen.... and this motherfucker has yet to show one ounce of remorse, sadness, or willingness to change course.  Wrap your fucking head around that.”

Wow, it’s almost as if Trump went to China, grabbed a bunch of test tubes full of COVID-19 germs, then went to 200,000 homes and sprinkled a wee bit in each. Maybe the government could have stopped him, but the Democrat half was too busy trying to fabricate evidence to impeach him.