Scores of people on the left and right who are worthy of media censure. Yet, while many media outlets eviscerate Steve Bannon, people like gay activist and writer Dan Savage tend to get a pass. And rather than being called out for his vitriolic and lewd statements, Savage routinely serves as a guest on CNN and MSNBC broadcasts. 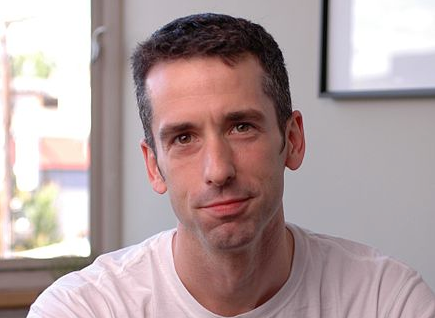 The networks have all written stories condemning Bannon’s alleged anti-semitism, but what about Savage’s hateful words about the Catholic church? In February 2013, the activist penned a celebratory post about Pope Benedict, titling it: “That Motherfucking Power-Hungry, Self-Aggrandized Bigot In the Stupid Fucking Hat Announces His Retirement.” Neither CNN nor MSNBC made any mention of the vitriol (but they did continue to bring Savage on air.) In August, ABC greenlighted Savage’s anti-Catholic show The Real O’Neals for a second season, despite dismal ratings and egregiously offensive content.

Savage is rarely held to task for his vulgarity. The speaker’s weekly “Savage Love” podcast is filled with crude and noisome sexual content. When neurosurgeon and former presidential candidate Dr. Ben Carson told CNN’s Chris Cuomo that he believed homosexuality was “absolutely a choice,” Savage wrote Carson a response. “Suck my dick,” the gay activist penned. “Name the time and the place and I’ll bring my dick and a camera crew and you can suck me off and win the argument.”  CNN’s Brian Stelter did ask Savage if it was “appropriate or necessary to lower” himself to that level. But after explaining that “sometimes you have to fight fire with fire,” the discussion proceeded somewhat ironically to Savage’s LGBT anti-bullying campaign “It Gets Better.” 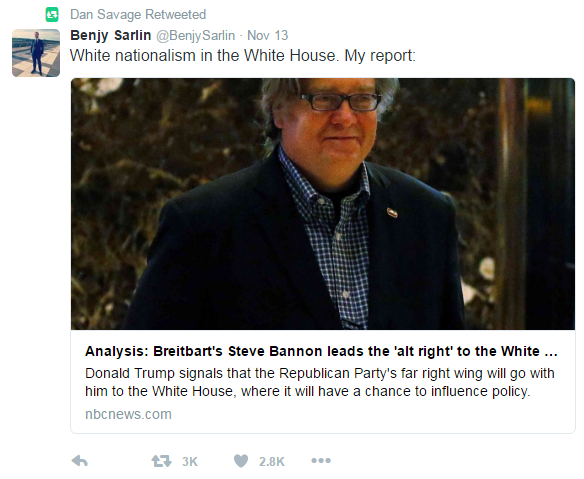 While speaking at a high school journalism conference, Savage employed his usual use of offensive language and sexual innuendo, but rather than simply discussing bullying, he transitioned to condemning Christianity and the “bullshit” in the Bible. When a large group of students decided to leave the room, he called them “pansy-assed,” noting that he had a right to point out their “hypocrisy.”

Even still, Savage has been welcomed to the halls of the White House for his “It Gets Better” campaign. Yet, Bannon’s forthcoming presence at the Presidential mansion is a source of consternation to the gay activist. On November 13, Savage retweeted an article from NBC and MSNBC journalist Benjy Sarlin with the caption: “White Nationalism in the White House. My report.”

The bottom line: vulgarity and vitriol exist on both sides of the spectrum. If Savage enjoys pointing out hypocrisy, one wonders if he sees it in the media?