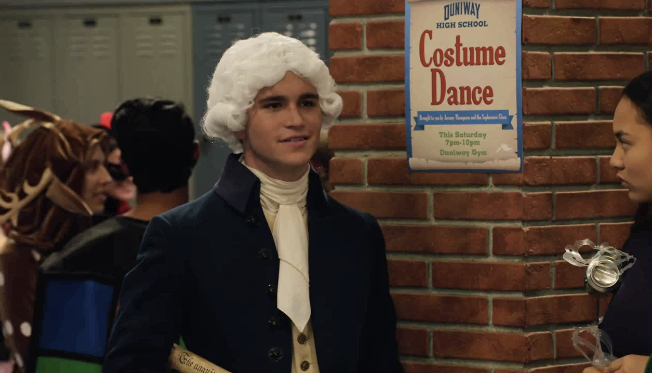 Netflix’s No Good Nick tells the story of Nick (Siena Agudong) who catfishes an unsuspecting family, the Thompsons, into thinking she’s family. Add in the Thompsons' daughter, the socially conscious Molly (Lauren Lindsey Donzis), and it gets a whole lot weirder.

The show is full of lines one would expect from a “woke” character. Molly tells her brother, Jeremy (Kalama Epstein), cars destroy the planet and explains she protested his ice cream social because it wasn’t “fair to the lactose intolerant.” She also chides her dad, Ed (Sean Astin), about how taco night is “cultural appropriation.” As Molly sees it, she’s “interested in social justice issues.” She tells a social worker that “I don’t believe in borders. I’m kind of an activist.” Her own mother, Liz (Melissa Joan Hart), refers to her activity as “propaganda.”

The most ridiculous form of social activism comes in the form of fining fellow high school students for wearing “insensitive or even offensive costumes” to a dance in Episode 3, "The Money-Box Scheme." The idea comes from Nick, who needs a fast con to pay her dad’s legal fees. To avert "a potential crisis," Nick suggests it's “our duty to educate” fellow students and the volunteer squad completely goes along with it. Their plan sounds more like indoctrination.

When Jeremy, who is organizing the dance, disagrees, he is told “let us do the fines, or suffer the consequences.” He soon learns his lesson when the volunteer squad protests him and claims he is “tool of the establishment” and an “opponent of social progress.”

As one could predict, the volunteer squad finds a reason to charge for any costume, including:

Jeremy’s sin of dressing up as Thomas Jefferson is deemed so terrible he’s not even allowed in his own dance, despite offering to pay the fine. His costume is called “totally unacceptable,” “outrageous” and “thoroughly problematic” on account of how “hello, Jefferson was a slave owner!” and “fathered six children with Sally Hemings.” When Nick suggests letting him slide, Molly says, "We can't give up the moral high ground to protect one relationship." Spoken like a true SJW.

Forget waiting for college for such protests. Students are starting even younger now.

Nick may be aiming to con the Thompson family, but she and the volunteer squad are conning viewers by spreading poisonous ideas about so-called cultural appropriation and the evils of our third president and author of the Declaration of the Independence. It's, as Liz calls it, "propaganda."