Happy Thanksgiving: 3 Shows We're Thankful For -- And a Couple Turkeys 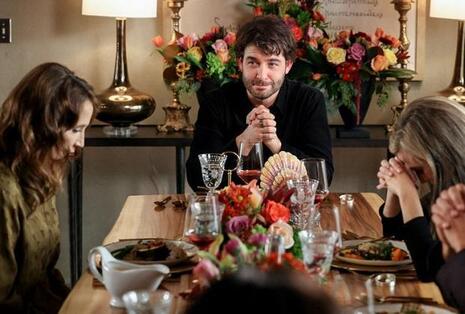 In the midst of the woke mob's strangling grasp on modern television, a few diamonds in the rough have shone through this fall. With Thanksgiving approaching, it is right to acknowledge the shows that gave a more conservative perspective to hot-button issues such as unplanned pregnancy, the fall of Afghanistan, and the police.

Starting with a precious ode to parenthood, the NBC drama Ordinary Joe deviated from the woke norm of declaring children as a burden to having a successful career and life.

In a bittersweet moment between Christopher, a wheelchair-bound child with a neuromuscular disorder, and his father Joe, the child asks if his existence ruined his dad’s once adventurous life. Joe responded, "Being your dad is more beautiful than any dream I could've ever imagined.”

Christopher: Did I ruin your life?

Christopher: I know you dreamed of being a musician, but you gave it up after college.

Christopher: It doesn't take a rocket scientist to do the math. I know that's when I was born.

Joe: Sometimes, the most beautiful dreams are the ones that we have yet to dream. And being your dad is more beautiful than any dream I could've ever imagined.

Christopher: I love you, Dad.

Joe: Back at you, Starman.

Joe’s response is a welcome reprieve from the recycled negative talking points surrounding unplanned pregnancies. The heartfelt moment was a perfect reflection of the joys of parenthood, no matter the situation.

We are also grateful that shows like CBS's The Neighborhood, ABC's Queens, and Hulu's The Great rejected pro-abortion language like "clump of cells" or "products of conception" and instead recognized the humanity of babies in the womb.

The United States of Al

Next, CBS sitcom The United States of Al shared its honest thoughts on the swift fall of Afghanistan to the Taliban following President Biden's unorganized and catastrophic removal of troops from the war-torn country this August: “It’s all messed up.”

Al, formerly an Afghan interpreter for the Marines, makes a call to his sister, Hassina, a UN worker still in Afghanistan. Their conversation is a stark reminder of the US citizens and allies that were abandoned by the Biden administration and how the country has since reverted to a hellscape for its citizens. Hassina asked for help to evacuate from Afghanistan, but Al had to reply, “They’re not coming for you”.

Hassina: In other cities, the Taliban are going door to door looking for people who worked with foreigners. I worked with the U.N.

Al: Hassina, listen to me. Nothing is going to happen to you. You have a Visa, you will be safe in Turkey.

Hassina: But we were making progress here. (Crying): Now it's all disappearing and there's nothing I can do about it.

Al: Hold on a minute, Hassina.

Riley: What do you got?

Todd: They're deploying Marines to Kabul.

Riley: What for? What's the mission?

Riley: (Sighs) All right, call me back when you know more.

Hassina: Did he say they're sending the Marines?

Hassina: To evacuate us?

Al: They're not coming for you.

Lastly, a classic police drama, Blue Bloods on CBS, diverted from the woke cop narrative and pushed back against BLM to expose the truth about hatred toward police and why crime is rising. In the aptly titled episode "Hate is Hate", the consequences of allowing one-sided hate to go unchecked came to light. A simple theme arose from the episode, "All crimes are hate crimes. No such thing as a love crime." This is a welcome dose of truth for those who are fed up watching Hollywood condemn those who protect and serve in blue.

Officer Eddie delivered a powerful message to the investigators hellbent on railroading her partner for pulling a gun on a man who assaulted her from behind, "You are supposed to be impartial. But that's what's wrong, right, these days? Nobody's impartial. Cops are hated. That hate is infecting this whole city, and frankly, it's infecting this investigation. Because you can take whatever you want, and you can twist it to suit whatever you have already determined. But she's done nothing wrong." Meanwhile, Police Commissioner Frank spoke truth to liberal lies boldly and unapologetically in his meeting with the mayor:

Eddie: He hit her. The crowd started taunting, and they were calling us murderers.

Man: You do know you're here as a witness?

Eddie: I know why I'm here.

Man: So, there's no reason to be defensive.

Eddie: If I don't defend my partner, who will?

Woman: We're not here to prosecute her.

Eddie: The truth? She's a great cop who's being raked over the coals for no reason.

Man: She pulled her weapon on an unarmed man.

Man: And showed no visible injuries.

Eddie: Why don't I tell you about the invisible injuries? You want to hear about those?

Woman: How about you just answer our questions?

Eddie: Why does it feel like she is being presumed guilty until proven innocent? Isn't it supposed to be the other way around?

Man: We haven't made a final determination.

Man: Are you done? Can we get on with the questions now?

Eddie: What do you got?

Mayor: I promised the community a bigger police presence.

Frank: I know. I watched the press conference. Gonna be tough to make good on that with less police and less money.

Mayor: I'm not discussing rolling back policies with you. Right now, my job is to get the city back up to speed.

Frank: The victim's parents will be thrilled to hear that.

Frank: And there is going to be more of it if you don't work with me.

Mayor: "Work with you" translates to lift all the restrictions on your department. Reinstate anti-crime, hire more cops.

Mayor: Answer's no. Let's move on. I heard you have an arrest in that other shooting.

Mayor: That's great. We should announce it this afternoon.

Frank: You can announce it. I don't need to be there.

Mayor: You'll be there.

Frank: I am not going to stand next to you and pretend your policies are working when they are not.

Mayor: Yeah, policies, plural. And some of mine are working damn well. And yes, there's gonna be some less-than-ideal impact in other areas, and that's called governing in the real world. Me wanting to grow back our economy isn't what's causing your crime wave, Frank.

Mayor: It is your department.

Frank: Well, at least you got that right.

Every Thanksgiving we have to deal with woke mobsters ready to “cancel” it. The first show to trot down that road this year was Grey's Anatomy, the marathon medical drama starring Ellen Pompeo as Dr. Meredith Grey.

While video calling her sister-in-law, Dr. Grey lamented about having to spend Thanksgiving trapped in a hotel room without her family. Dr. Grey's adopted child then provided her innate woke wisdom regarding the turkey-filled holiday, stating that “Thanksgiving isn't really a holiday we should celebrate. There's no actual evidence Native Americans were even invited to a feast. I think they cared more about being colonized and having their land stolen than mashed potatoes.”

On a holiday when Christians gather to be thankful for God’s grace and all He's given them, dishonorable mentions go to Dan Brown’s The Lost Symbol on Peacock for calling the Bible "a bizarre book of stories filled with contradictions, with outdated beliefs, with outright absurdities"; the ABC drama Queens for featuring a closeted gay priest calling a lesbian a “hero” and an “inspiration” for coming out publicly; and FX on Hulu's Y: The Last Man for mocking the Eucharist by feeding it to a monkey.

Happy Thanksgiving from all of us at NewsBusters!