Closeted Priest on ABC Drama Praises Cheating Lesbian in Confessional: 'You're a Hero' 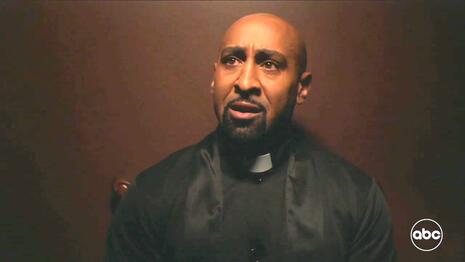 ABC’s new drama Queens has really had it out for Christians and the Catholic Church since its premiere.

Apparently, the show’s writers really dislike Christian “restrictions.” You know, the ones that God Himself created for us and outlined in the Bible. But leave it to liberal Hollywood to think they know better than God. They also throw in the very overdone and tiresome “secretly gay priest” trope just because they can, and the priest even goes so far as to hail a cheating lesbian as an "inspiration" and a "hero."

Queens centers around four female R&B stars from the ‘90s who are reuniting in their 40s in an attempt to relive their former fame and glory. We’re only four episodes in, but the show has already been heavy-handed in pushing a liberal agenda on sexuality and even tried to use Christianity to defend it. One of the stars, Jill (Naturi Naughton), who is a practicing Catholic, comes out as gay and leaves her husband, a deacon, for her girlfriend, Tina.

On Tuesday’s episode, “Ain’t No Sunshine,” Jill is already cheating on Tina just after leaving Darren and is wondering if she should tell Tina or not. Her guilt consumes her and leads her into the confessional where she receives a very surprising answer from the secretly gay priest who recites the rap lyrics she sang when she came out publicly, and calls her a “hero” and an “inspiration”:

Jill: It's been three weeks since my last confession. They always say start with the most difficult sin, so... I cheated on my girlfriend. I cheated on the girlfriend that I cheated on my husband with. I'm a cheater. And I love Tina. But am I ready to settle down again right away? What should I do? I mean, do I tell her? Do I tell Tina? Father?

Priest: You're an inspiration. "I never knew I would end up kissing a girl. But thanks to you, I can tell the whole world." I saw the BET Awards.

Priest: I love God. I love professing the Gospel, but the Priesthood comes with... restrictions. You're a hero.

Jill: Are you happy, Father?

Priest: We're asked to make sacrifices for God, and that was my choice. But I often wonder, what would my life be like if I was free of expectations or restrictions?

Ahh, yes. What would the world look like if we all just did what felt good and what we think will make us happy without any “restrictions” or “expectations?” I suspect God knows exactly how that would turn out. In fact, the Bible has given us examples of exactly what that would look like and what the consequences would be. One woman, Patti Height, recently gave her testimony about doing what she thought would make her happy and buying into the LGBTQ agenda that’s pervading our culture and leading many away from God. Her testimony about getting right with God and how He loved and rescued her even in the midst of that lifestyle is extremely powerful.

Those “restrictions” aren’t there to put a damper on our lives. They’re there to protect us and guide us to right living, which leads to the best gift of all… salvation. I think I’ll keep following God’s “restrictions” and reading my Bible rather than following Hollywood’s idea of what Christianity should look like.

Conservatives Fight Back! Let Target, L’Oreal, and Macy's know how you feel about them sponsoring this anti-Christian episode!