Grey's Anatomy: Thanksgiving 'Isn’t Really a Holiday We Should Celebrate' 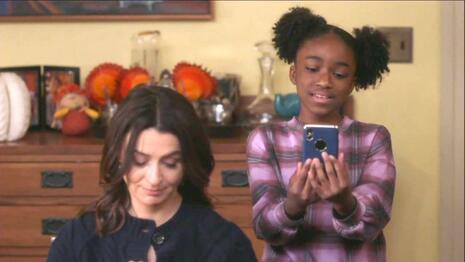 In Thursday's episode, "Every Day Is a Holiday (With You)," Dr. Meredith Grey (Ellen Pompeo) is unable to travel back to her home in Seattle when weather cancels her flight from Minneapolis. She calls home to let her family know that she will miss Thanksgiving as she settles into her hotel room.

While she is FaceTiming with her sister-in-law, Dr. Amelia Shepherd (Caterina Scorsone), Meredith’s preteen adopted daughter Zola joins in the conversation. Zola is a woke child and tells her mother that it’s ok that she is missing, Thanksgiving isn’t really a holiday, anyway:

Meredith: I am exactly like my mother. I'm in a hotel room, missing the holiday with my family, and I'm eating stale nuts for dinner.

Amelia: From what I've heard, Ellis Grey wouldn't have made it home even if it were blue skies and sunny.

Meredith: You're not helping.

Amelia:  That's because we're fine. I will cook.

Zola:  It's okay. You tried to get here. And Thanksgiving isn't really a holiday we should celebrate. There's no actual evidence Native Americans were even invited to a feast. I think they cared more about being colonized and having their land stolen than mashed potatoes. I'm sorry you're alone and eating peanuts, though. Love you!

Meredith: I love you, Zola.

It’s a popular theme with network television shows during the days leading up to Thanksgiving. We are to be shamed for the settling of America by the pilgrims. The colonizers were called cannibals and the day was labeled “Colonizer Christmas” by some MSNBC talking heads last year. "Happy Genocide Day," another ABC comedy said in 2019.

Liberals ruin everything and they are ruining the holiday for the next generation, too. Meredith and Amelia both nod in agreement with Zola as she recites talking points probably taught at an anti-racist, pro-CRT school. It’s obnoxious. Fortunately, most Americans are blissfully not woke and count the day as one to show gratitude for the blessings of America. Pass the mashed potatoes, please.

Conservatives Fight Back! Let the sponsors of this show, like J.C. Penney, Unilever, and Samsung know how you feel about them trashing Thanksgiving.