What’s in a Nickname? What They Worry About in San Fran

San Franciscans can put up with a lot. Industrial-scale shoplifting, violent crime, an army of homeless, open-air drug markets, streets paved with human feces, astronomical housing prices – nothing phases them in the City by the Bay. 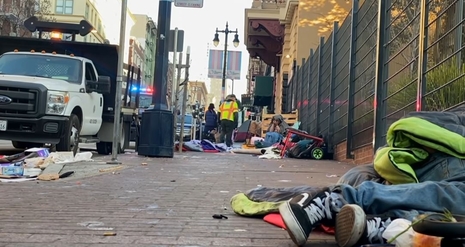 Just don’t call the place by the wrong nickname. According to SFGate, the Giants Team Store is selling “gear with San Francisco's most hated nickname.”

What could it be? “Needle Town?” “Poopolis?” “Sodom by the Bay?” “The Place That Inflicted Journey on Us?” Surely it’s some moniker that reflects the lawlessness of the city, the debased quality of life taxpayers endure, the contradiction of draconian environmental regulations versus the libertine nature of a town that proudly hosts an annual “Kink Festival.”

Really. Look, that’s cute and all. Nothing wrong with light-hearted filler.

But you live in a city that has been run into the ground by moonbat lefties. Just this year you had the DA and several school board members recalled. You live in a state that’s hemorrhaged thousands of companies and is currently waving goodbye to many thousands of residents looking for some sort of normality. For Chrissake you can’t get a plastic straw in a restaurant. But a tee shirt bearing the words “San Fran” is worthy of an article.

Be glad the Giants aren’t selling gear that says “Someone Went to San Fran and All I Got Was This Lousy Needle.”