Jefferson Founded UVA. The Student Newspaper Wants to Cancel Him

Then they came for the Founders. You knew it would never stop at Confederate generals. Our young Taliban has gotten the taste for erasing history – all of it (or at least that which doesn’t highlight transgendered black lesbian abortion pioneers). 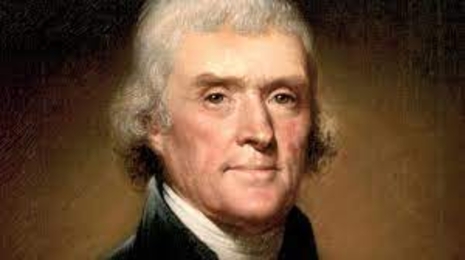 According to Breitbart, the woke mob at the University of Virginia is working itself up for a double purge – one man, two founders. Thomas Jefferson founded UVA, and helped found America.

The editorial board of the Cavalier Daily student newspaper wants to erase all traces of Jefferson, calling for “a physical environment that reflects our commitment to equality and disavowal of white supremacy.” That would be a campus uncontaminated by any hint of the slave owner Jefferson.

We reject how the University’s physical environment — one that glorifies racists, slaveholders and eugenicists with statues and buildings named in their honor — upholds an enduring culture of white supremacy.

The board asserts that the tiki torch incels of the “Unite the Right” rally “felt comfortable marching through Grounds” because, “Our physical environment — from statues to building names to Jefferson’s overwhelming presence — exalts people who held the same beliefs as the repugnant white supremacists in attendance.”

This hellscape of oppression must change: “These buildings must be renamed and memorials removed.”

Couple of points here: the rally in question was a handful of weirdos who climbed out of their parents’ basements. That it ended tragically doesn’t give it any more significance, except in the ways the left can use it as a weapon.

Second, if you believe statues and dorm names really move what’s in people’s heads and hearts, maybe your “commitment to equality” isn’t as absolute as you would like. Ask a psych major about “projection.”

And get over yourselves.