Thank Gaia for Oregon Democrats. They have, in their magnanimity, at long last imparted dignity to menstruation. Governor Kate Brown signed the Menstrual Dignity Act, and finally, the women of Oregon can … menstruate with dignity? 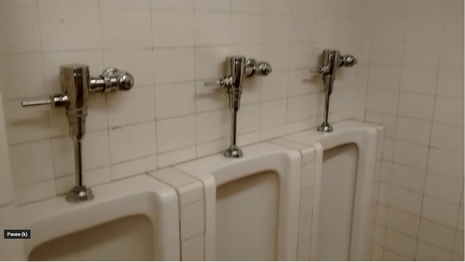 Stupid? You bet. But that’s not the dumbest part – not by a long shot. Under the Act, the boys’ rooms in every school in the state will boast tampon dispensers.

Writing at the Daily Signal, Tony Perkins of the Family Research Council quoted bill supporter from (where else?) Portland:

This will show all of our youth, and especially our trans youth, that the bathroom they’re using, that affirms their gender, that it’s for them, and it has the products there that they might need.

School boys’ rooms were once utilitarian affairs, places for a pee and a quick cigarette between classes. Administrators didn’t want kids spending a lot of time there, so they were short on affirmation, gender or otherwise. Now, every pitstop is a celebration of your identity.

“Inclusivity” is today’s enlightened watchword. It’s even defined in the Menstrual Dignity for Students Toolkit the state is giving out to educators to help them promote menstrual dignity:

Inclusivity means including, affirming, and honoring differences in how communities learn about, access, and make decisions about health. This means that transgender, intersex, non-binary, and two spirit students need to be affirmed in their access to products.

Um, those “two spirit” students … are the spirits on the same menstrual cycle? Just curious.

Anyway, thanks to the dopy ideology and utter unseriousness of state legislators, Oregon taxpayers are ponying up to purchase and install thousands of the free tampon dispensers which, as Perkins notes, “cost up to $400 a machine.”

Oregon residents put up with a lot – just have Portland in your state is an embarrassment. Now, paying for a useless gesture to make woke legislators feel good? What does it take to turn Oregonians into Oregoners?