Serious ethical question for any newspaper not named USA Today : If you accept an op-ed from an author representing one side of a highly controversial issue, is it right to change that writer’s words to conform with the language her opponents prefer? Is it right to do it retroactively, and without informing her? Further, is it right to call her original terminology “hurtful?” 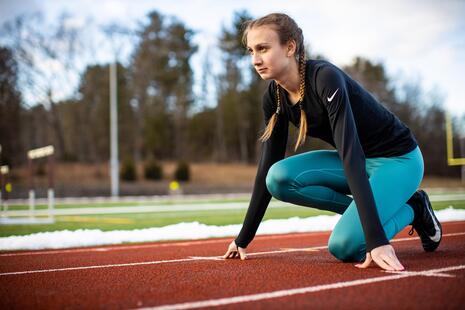 On May 22, USA Today (motto: “Ethics, Schmethics!”) published an opinion piece by Chelsea Mitchell (pictured), a now-collegiate track athlete who in 2020 “was ranked the fastest high school female in the 55-meter dash in the state” of Connecticut.

The problem is, that’s not what Mitchell wrote, and not what USA Today originally published. Throughout her essay, Mitchell referred to the runners she lost to as “male.” And she did so with a reason.

Mitchell and other affected athletes, represented by Alliance Defending Freedom, filed a lawsuit against Connecticut Interscholastic Athletic Conference (CIAC). It lost in a federal district court, but ADF is appealing to federal appeals court.

Thus, Mitchell’s words matter. “The editors put words into Chelsea’s mouth without notice and after the piece was published,” ADF Director of Media Relations Elizabeth Ray told MRC. “In nearly all cases, such edits are made and negotiated before publication.”

Unless you’re trying to blunt the author’s argument.

Mitchell’s entire argument is that she was forced to compete against biological males.

The paper is almost certainly hostile to Mitchell’s position -- it’s proven itself plenty woke just recently. But what gives the game away is this, slapped on at the head of the amended op-ed:

Editor's note: This column has been updated to reflect USA TODAY’s standards and style guidelines. We regret that hurtful language was used.

So somebody in the trans activist industrial complex complained that accurately describing biology is “hurtful” and USA Today neutered Mitchell’s argument. It has nothing to do with the paper’s “standards and style” (stop laughing!). If it did, as Ray pointed out, it could have added the editor’s note without altering Chelsea’s words.

But that would never do. The left has a tried and true strategy: If you can’t win the debate, change the terms of the debate. It’s hard to argue when language is meaningless.

Ray says that Mitchell wants the second sentence of the editor’s note removed though, quite sensibly, she doesn’t expect a response from USA Today. Still, USA Today folded to pressure once. Who knows, maybe it’ll fold again.