Patriarchy Got You Down? Try Alicia Keys's ‘Divine Feminine’ Meditation 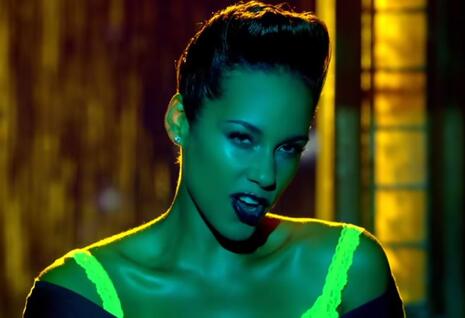 Keys is partnering with spiritual used car salesman Deepak Chopra to hawk some meditation program. But readers have to wade through a lot of New Age flatulence before getting to the sales pitch.

Specifically, the diva expounds on the “creative, healing energy” of the “Divine Feminine.” Like a coed who just discovered pot and woman’s studies, Keys enthuses about “Kundalini yoga” “kundalini energy [that] rests in the base of your spine.” That helps you channel the Divine Feminine, which is associated with “mothering” and “Mother Earth, who “feeds you, holds you, cares for you and supports you, makes sure you’re good.”

“I have to be honest,” she admits, “The first time I tried the meditation, I was so tired that I fell asleep.” Would that she continued to be so sensible. Unfortunately, she “started to notice a richer connection with” the center of the modern universe: “myself.”

And getting in touch with the wonders of Alicia helped Alicia be a “better,” “more confident” Alicia:

Now I could be crystal clear, powerful and strong and not back down because I had a way to access my own intuition. I had made a genuine connection with the Divine Feminine.

But you know who wasn’t helping Alicia be all the Alicia she could be? The patriarchy. [Hiss! Boo!] We dull, benighted “folks in the West” think that “if we identify as men then we have ‘masculine’ energy; if we identify as women, we have ‘feminine’ energy.” Not so!

Because the patriarchy has positioned itself into having so much power, destroying rather than creating, we’ve lost touch with the potency of the Divine Feminine.

And then she goes right for the fashionable woke sweet spot:

For so long, that overload of masculine energy has run the world, creating a lot of chaos and hate. We see it in racism and white supremacy, gender inequity, gun violence, police violence, violence against AAPI people, transgender and gender non-conforming people, LGTBQIA+ discrimination and archaic mind states.

But that’s nothing. A little later, she gets back to the topic that really moves her: Alicia and caring motherly earth-mother-type people like her.

The caretakers among us have to make some literal and energetic space for ourselves, nurture ourselves and invite soulcare into our lives, accept ourselves as we are and embrace our inner light. As we climb out of the pandemic, we can use self-care and self-love to balance out the loss and brokenness around us.

Maybe some day, we can all be as Alicia as Alicia is. In the meantime, As GK Chesterton thought but probably didn't say: "Y'all need Jesus."