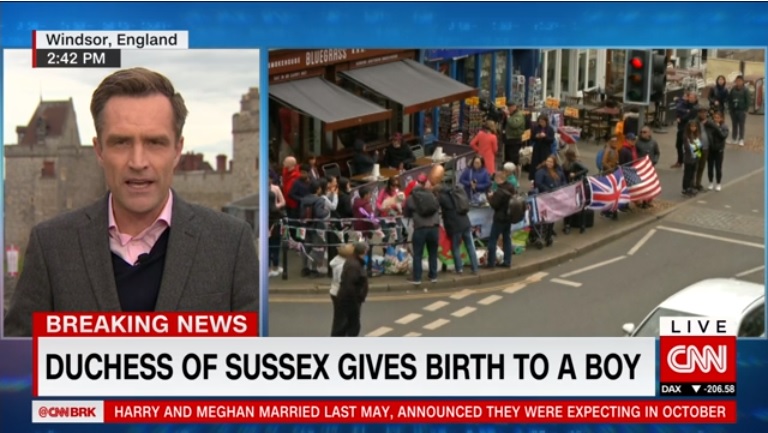 “It's already happened,” writes CNN’s John Blake. “People are obsessed over the appearance and racial identity of the new royal baby. That's going to go into overdrive now.”

They are? It is? Well Blake certainly is, spinning out a long article speculating about the race and looks of an infant in another country he likely will never meet.

“Prince Harry and Meghan, the Duke and Duchess of Sussex, just gave birth to a boy,” Blake explains.” The royal baby becomes the ‘first Afro-American baby born into the royal family,’ a ‘gorgeous’ symbol of racial progress in the US and Britain. It's a lovely story that deserves to be celebrated.”

Yep. God bless the little fella -- whatever his race -- he won the cosmic lottery.

“But let's not use the royal birth to trot out a dangerous myth,” Blake warns. “Let's not turn this child into another "Great Mixed-Race Hope."

Er, okay, you got it. Note-to-self: “no mixed-race-hope.” Now, can we move on to some actual news, maybe Israel …

“We've seen this story before,” Blake writes -- and darn it all, he’s gonna rehash it for us. “A mixed-race person is elevated to a position of prominence. They're touted as proof of racial progress, part of a Brown New World in which racism will inevitably collapse in the future because there will be so many interracial relationships.” It’s the “ongoing ‘fetishization’ of interracial” people. Blake says Obama’s “hope and change” was based on his “biracial upbringing, [which] was supposed to help him bridge racial differences.” He cites Sheryll Cashen who believes “through intimacy across racial lines, a growing number of white Americans are learning to empathize with blacks and other minorities.”

"Eventually, a critical mass of white people will accept the loss of the centrality of whiteness," she wrote. "When enough whites can accept being one voice among many in a robust democracy, politics in America could finally become functional."

So we can finally kill sugar subsidies and Head Start and fix Social Security if whites stop … being white?

But Blake refuses to move on.

Interracial children were once considered tragic figures, self-loathing objects of pity trapped between two racial identities. It was the "Tragic Mulatto Myth." It's why we were once called "mixed nuts."

The tragic mulatto has now morphed into another myth -- the "magic mulatto." We are treated as symbols of a new racial order where racism will inevitably lose its sting in the future because so many racial lines have been blurred.

He asks “How black will the royal baby be?” and spends several torturous paragraphs on “quadroons” and “octoroons,” the “one-drop” theory and wondering if Meghan Markle would be as beloved if she had darker skin and curlier hair. How will the child’s looks impact his popularity and power?

But after all this obsessing over race and looks and skin tone he says. “We have to get rid of race. Racism isn't the original sin; race is.” And “others who study race” agree. Now that sounds constructive. Color-blindness is a virtue we should be striving for and … Hold on, he’s not done. He quotes another person who studies race, explaining, “The need to morally justify enslaving other human beings pushed Europeans to invent a mythical biological racial 'essence' of inferiority for African-descendent people.” Sure. Get rid of race. But not before emphasizing that race is white people's fault in the first place.

Blake wraps it up saying:

Here's another story I'd like to celebrate one day.

Imagine a child born to a couple like the Duke and Duchess, and no one obsesses over their racial mixture, or how white or black they look.

Imagine if that child was born with dark skin, a wide nose and kinky hair -- and people would still call that child "gorgeous."

Yeah, imagine if a CNN writer didn’t spend north of 2,000 words obsessing over the kid’s racial mixture or how white or black he looks?