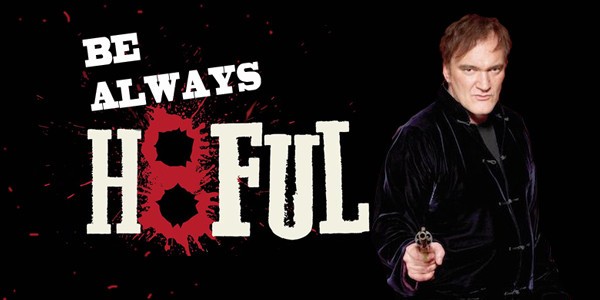 Quentin Tarantino: Dumb as a post or incredibly dishonest? Both?

The “pornographer of violence” (Joe Scarborough’s term) takes umbrage when asked about the impact of violent films and TV on society. “Obviously, I don't think one has to do with the other,” he once sputtered when pressed on the issue. “Obviously, the issue is gun control and mental health.”

But he’s tickled about how his new flick, The Hateful Eight, relates to society. The western, he recently told Vulture, is “about the country being torn apart by [the Civil War], and the racial aftermath, six, seven, eight, ten years later.”

And while Tarantino swears “I’m not trying to make Hateful Eight contemporary in any way, shape, or form,” he’s “very excited” that “Finally, the issue of white supremacy is being talked about and dealt with. And it’s what the movie’s about.”

You see, the guy that in Reservoir Dogs lovingly choreographed and filmed a five-minute scene of a criminal torturing a cop (including slicing off his ear) is hopeful America is finally going to be purged of her sins. “I love the fact that people are talking and dealing with the institutional racism that has existed in this country and been ignored. I feel like it’s another ’60s moment, where the people themselves had to expose how ugly they were before things could change.”

Presumably, that change won’t come through democracy, for which Tarantino doesn’t seem to care. Because as Barack Obama’s No. 1 Fanboy, he’s totally stoked the president’s been ruling by executive fiat.

Yeah, unless you care about constitutional government. Scratch a liberal – or cut his ear off – you find an authoritarian.