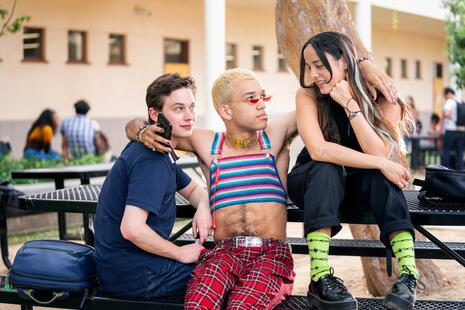 The Lena Dunham-produced dramedy follows “a group of high school students who explore their sexuality in a modern world.” Essentially, that just means a bunch of 16–18-year-old kids having sex, doing drugs, and making the worst decisions imaginable, because it’s realistic or something. The “Pilot” itself opens with a teenage girl going into labor in a store dressing room because she never realized she was pregnant and refuses to tell her parents. It pretty much goes downhill from there.

There’s nudity, of course. Fortunately, this time we only see two penises over three half-hour episodes, including a d*ck pic that becomes the subject of the second episode “Dickscovery.” Only a couple of penis shots is better than the dozens that show up on Euphoria, but really the correct number either of these shows should have is zero.

What it lacks in nudity, however, Generation makes up in vulgarity and vapid wokeness. Over fifty f-bombs are dropped by nearly every teen character and we hear lines about how “we’re all gonna be dead by 2050” in “a world that’s literally uninhabitable.” Someone needs to tell HBO that these do not qualify as personality traits, not even for teenagers.

Considering this comes from the company behind Euphoria as well as Lena Dunham, this could have been far worse, though, there are plenty of episodes still to come. As it is now, though, I fear for this generation.