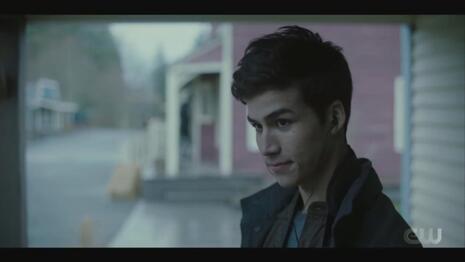 Just because CW’s horror series Two Sentence Horror Stories focused on transphobia doesn’t mean it forgot about other marginalized groups. The show’s two-episode season finale makes the bold statement that no monster or evil spirit can be as bad as the evil white man.

The February 16 episodes “Ibej” and “Manifest Destiny” both focus on one asserted truth: white people are the worst. It starts off with “Ibej” where a Nigerian American nurse named Eneh (Martyne Musau) helps her twin sister Adaora (Nicole Nkowkolo) after the latter suffers a stroke. She quickly takes her sister to the hospital where they’re forced to wait for treatment. And because this show is not subtle in the least, they practically spell it out for us that they are treated differently because they are black.

Eneh: This is ridiculous. You should've been seen by now.

Eneh: Three hours is BS. Are you kidding me? I saw that woman in the waiting room. She got here at least an hour after us. This is... [Sighs] Excuse me, doctor. My sister may have had a stroke and we've been waiting here for almost three hours and-

Doctor: I'm sorry ma'am, but you have to understand there's a triage.

Eneh: I'm a nurse, I know what triage is. I also know that I've seen patients who got here after us, and yet they've been seen.

Doctor: I'm going to ask you to calm down. You know, it's great that you're a nurse, but you're not a doctor.

Eneh: She complained of a headache, she's been listless, might have lost motor functioning on one side of her...

Doctor: I appreciate your diligence, and when the attending comes, they will too.

Eneh: You're not hearing me.

Doctor: It does not appear to be an emergency. They would've noted that at intake. And as a nurse you must know there are many things which can present as a stroke. Anxiety, insomnia, drug use.

Eneh: Drug..?! Do you really think I haven't noticed how this hospital has been treating its black patients?

Doctor: I do not appreciate your insinuation. Now your sister will have to wait her turn just like everybody else. Or you're welcome to go to another hospital, one where you'll feel more... comfortable.

The episode proves Eneh right as Adaora suffers paralysis after taking so long to be treated, and the doctor advises her to a hospice facility. There, she receives worse treatment with only two nurses on an entire floor of black patients. The nurse agrees with Eneh’s frustration but notes, “Management just doesn't care about anything but cutting costs.” Management, of course, is an old white man. The main point is that white people will basically leave black people to die in hospitals because they are that racist. I suppose that’s not the worst accusation that’s been made about doctors on TV.

Then there’s “Manifest Destiny.” A Native American man named Jeremy (Joel Oulette) helps his girlfriend Rosalie (Christie Burke) film an Old West reenactment for her podcast. This reenactment involves a Native man attempting to marry a white girl and bring their cultures together, so, of course, it’s not the real story. Jeremy says as much to his naïve girlfriend, complaining about the “white story.”

Jeremy: That scene was total crap.

Rosalie: That's what I thought. Okay, tell me.

Jeremy: It's all made up. This isn't an Indian story. It's a white story where they make up what Indians do and say in it. I doubt there was a relationship, but even if there was, there's no way an Indian guy is going to fight that sheriff.

Rosalie: Jeremy, what you just said, would make this story so much deeper. Okay. What if you guest-hosted on this episode with me? I mean, sharing exactly what you just did. Your, your, your experience, your perspective. I mean, it's about your tribe after all, right?

Jeremy: Not exactly my tribe. I'm Cree, this is Blackfeet.

Rosalie: Oh. Okay, yeah, but it's all Algonquin though, right?

Jeremy is proven right when he learns the real story involved the sheriff organizing a posse to attack and kill all the Natives in their town. When the spirits of this town take over the actors, the episode becomes a violent reminder that white people are the worst.

Considering all the BLM propaganda from the past few months, do we really need more shows telling us to hate white people?

This show is sponsored by commercials from T-Mobile, Progressive, and Geico.