'Press Secretary' Sarah Silverman Declares 'It's The End of Days!' On Hulu Show 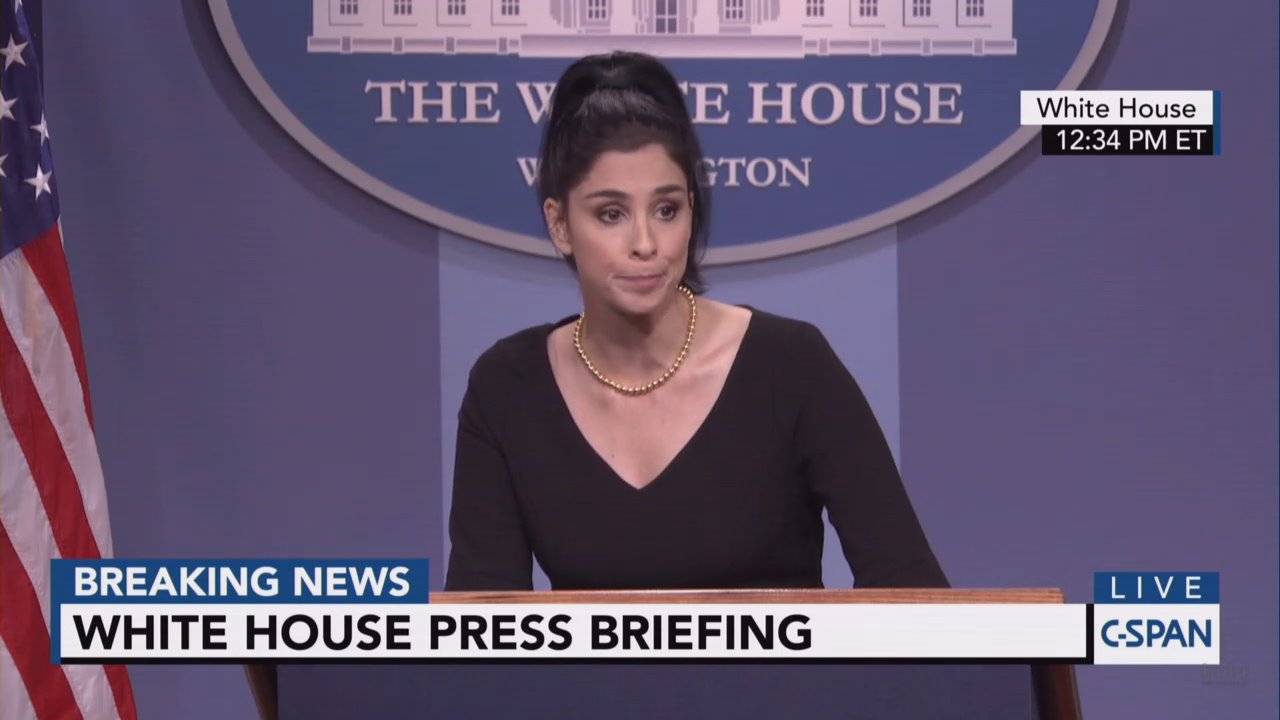 We’ve finally reached the end of the season for Hulu’s I Love You, America with Sarah Silverman, and it couldn’t get here fast enough. As usual, the comedian takes the half-hour to promote liberal politics, slam conservatives, and endlessly insult Trump. Remember back when her stated goal was to "connect with un-like-minded people"? Because I doubt she does. I know I shouldn’t expect anything from the series that has gone on more than twenty episodes, but I keep getting disappointed.

The November 15 episode goes out on a low note with Sarah portraying herself as the new Press Secretary for President Donald Trump. Although she doesn’t directly rip off Sarah Huckabee Sanders, she does dress and act like her perception of Sanders and alludes to her being "f*cking crazy" for saying that the President doesn't lie to the American people. Using stock footage and questions from past White House press briefings, she slams the Trump administration, indirectly calling Trump a criminal, an eight-year-old, and a pervert. Then she labels the administration as “the end of days.”

Sarah: I actually can say with all honesty, President Trump did not commit a crime. Alright, next question.

Steven Portnoy: Does the president still deny that he ever had a relationship with a woman named Karen MacDougal?

Hallie Jackson: Given that the president promised to hire the “best people,” did he fail to live up to that promise?

Sarah: Yeah, sorry, that was miscommunicated. He promised to get the best peephole. It’s actually, it’s a hole in the women’s bathroom that he can look through when he’s punching his penis. Ah!

Terry Moran: Is that presidential?

Kaitlan Collins: So how do you explain that?

Sarah: Well, you know, he wasn’t shown love in his formative years and he was taught that his only value was money, you know, and he didn’t earn his money, you know, he was constantly given it from his father, that’s when he like started, you know, gold plating everything and wearing suits that matched his car and he never really emotionally grew past eight years old. His mother had this like, odd disdain for him, and because of it he, you know, reenacted the trauma through copying her hair.

Cecilia Vega: Can you stand here today and say the President has never lied to the American people?

Jeff Mason: Is this some kind of precedent he wants to set for future presidents when his administration is out of office?

Sarah: The future! Jerry, did you hear that? How cute is that? Sweetie, it’s the end of days. Alright, I gotta go. Don’t be enemies of the people. Peace!

“It’s the end of days”? Something tells me that Sarah is running out of insults. After using every name in the book, this comment is less funny and more pathetic with how low she’s gone. Besides, she’s already informed us that we’re going to “f***ing die” from climate change. She has to keep up with her own talking points.

This may be the season finale, but Sarah isn’t letting up with jabs. Her “quickie” this week covers the recent “Nazi prom” photo that appears to feature several students giving the Nazi salute. Despite the fact that she herself has joked about Hitler and the Holocaust, she immediately jumps to condemning the boys for what has been labeled as an unintentional image. As long as she gets to call white boys Nazis, I guess it doesn’t matter.

Then we jump into her monologue. In an unexpected turn of events, she decides to start off by listing things she’s thankful for in honor of Thanksgiving. In a predictable turn of events, she uses it to demean Donald Trump. She rants, “He has put kids in cages, he’s nominated an alleged sexual assaulter to the Supreme Court, he ordered a Muslim ban, reignited the white supremacy movement.” Do I even need to bother to say how none of those things are true?

The point of her rambling appears to be that she is thankful for the resistance movement that rose out of Trump’s election. She even boasts how the new Congress in 2019 will be “the least white and least male” Congress in history, as if that’s an accomplishment. In reality, the only reason she should be thankful for Trump is giving her a new hobby of spreading liberal propaganda.

Even the segments that aren’t particularly political she finds a way to sneak in politics. One piece focuses on Sarah making a death plan with her dad, and her dad wears a shirt with slogans like “Black Lives Matter” and “No Human Is Illegal.” The final portion of the episode is simply sitting down with singer Sturgill Simpson, and they soon criticize the Country Music Awards for not discussing the Las Vegas shooting last year, blaming the "NRA-based" audience as usual.

It may not be the “end of days,” but it’s fortunately the end of this season. Like last year, I Love You America has been a non-stop rampage against conservatives and all things Donald Trump. And for what? Conservatives certainly aren’t cheering for it, and Sarah has openly admitted that she considers Trump supporters akin to cult members ideologically. Nothing has changed since the show began last year, it has only gotten worse. Hopefully that will be enough for Hulu to finally put this show to rest.