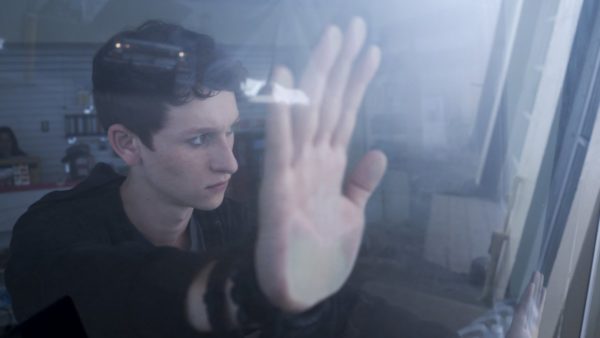 As a show that’s supposed to be highlighting the downfall of social structure as monsters reign around the city, Spike’s The Mist is…surprisingly dull. Maybe it’s because the series depends on me caring about paper-thin liberal stereotypes as they dryly whisper through their been-there, done-that TV problems and are momentarily distracted by fog and the occasional gratuitous death scene. When that doesn’t work? Throw in another cliché!

I know what you’re thinking, after the onslaught in the pilot, can there really be more liberal nonsense? Unfortunately, that answer, in both television and real life, is usually yes. The July 20th episode “The Waiting Room” proves that with the old “homophobic character turns out to be a self-loathing homosexual” plot. Unsurprising plot twist: he is also a jock.

After managing to reach a hospital with Kevin (Morgan Spector), Mia (Danica Curcic), and Bryan (Okexie Morro), pansexual Adrian (Russell Posner) comes across a jock who previously called him a "faggot" in the premiere. Seeing past the façade, Adrian later encounters him in the bathroom to prove his feelings by kissing him. Of course, Adrian is proven right when the jock kisses him back - after first cursing at Adrian and beating him up.

Adrian: What are you doing here?

Adrian: At the hospital. Why are you here?

Ty: What does it matter to you, faggot?

Ty: My mom had a panic attack when this thing came. Phones were dead, so I ran here for help. Guess I'm stuck here. [ Flushing ] [ Water running ] What? What the hell did you do that for, faggot? Huh? You little faggot bitch! -- You! -- You!-- You.

After all, we all know those angry, closeted jock-types in our lives. And by our lives, I mean the liberal TV tropes that were declared dead way back in the '90s. At this point, it would have been a bigger twist if the jock was just a jerk, and the show realized not everything has to revolve around a person being gay.

Unfortunately, if you aren’t a fan of all that, your only other scene option is to watch Kevin performing a gory makeshift surgery on his brother. And then watch his brother get devoured by monstrous leeches before Kevin shoots him out of his misery. Yes, it was a full hour featuring gay posturing and overwhelming gore.

So we now have "girl raped by popular boy but no one believes her" plot, the "woman ostracized for trying to teach sex-ed" plot, and the "homophobic jock protests too much" plot to finish off the first half of the season. All that’s missing now is the pedophilic priest. Trust me, it’s coming.