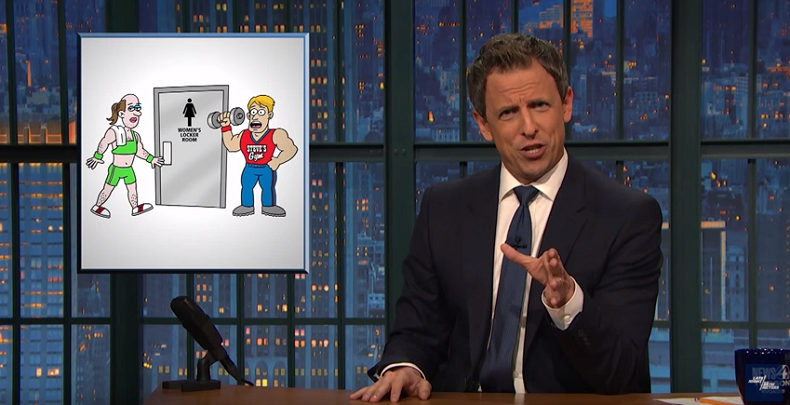 Since Houston voters overwhelmingly rejected the “transgender bathroom rights” law known as “HERO” Tuesday night, the media have been frantically trying to spin the story as a case of anti-LGBT, religious extremists getting their way.

NBC’s Late Night with Seth Meyers was no different, and, in a rant, the host found a way to bash both Houston voters and GOP candidate Mike Huckabee.

Seth Meyers opened the segment by boasting of the high-profile support for the ordinance from President Obama and major companies like Apple, General Electric and Hewlett-Packard.  Meyers then proceeded to trash opponents’ argument that this law would open the door for a biological male to enter a women’s restroom or locker room.

“That’s right,” Meyers scoffed. “Opponents of the law claimed falsely that the bill would allow anyone of any gender to walk into any bathroom they wanted,” he argued. “The idea is known as the ‘bathroom myth’ and the anti-HERO ads focused heavily on it,” Meyers lectured.

Next, Meyers played the silliest ad he could find by opponents to mock Houston voters as fear-mongers instead of using an ad, like the one below, from FRC Action.

Meyers insisted again that the majority of Houston voters were wrong. “So the ads focused exclusively on the bathroom issue even though the law had nothing to do with that,” he claimed. “There's also no evidence that this has ever been a problem in places that do have these laws,” he argued.

Apparently Meyers hasn’t heard of Hillsboro High School, where students complained and led a protest because girls had been exposed to a transgender male student in the women’s locker rooms and restrooms. Or of Springfield, MO, where voters rejected a similar bill to HERO after the city council had signed it into law.

Meyers finished his segment by playing a short clip where Huckabee made a joke about men entering women’s restrooms. Afterwards, Meyers proclaimed, “Mike Huckabee: You a creep. For real,” to audience laughter. Meyers scoffed, “[H]e’s running for President?”