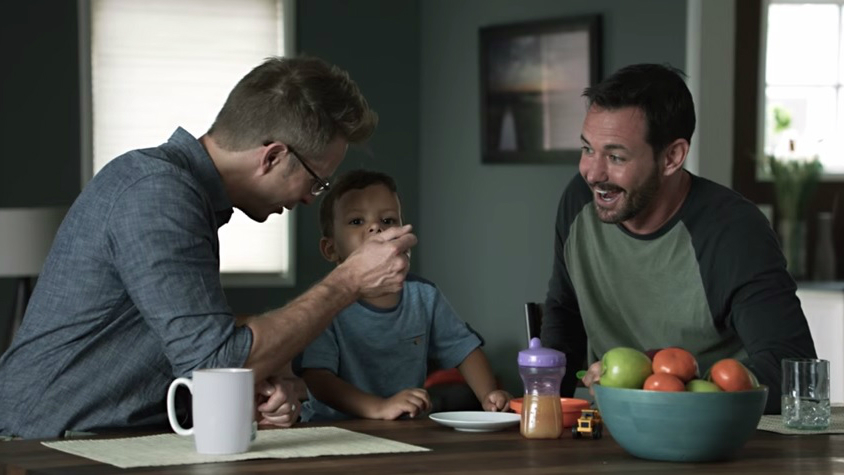 Campbell’s has found a way to mix soup, Darth Vader and gay marriage all together for the perfect taste – or so it thinks.

To begin, the ad shows a man spoon-feeding his son Campbell’s “Star Wars” soup while impersonating Darth Vader growling, “I am your father.”

The camera then moves to include a second man at the table who argues back, “No, no, no, I am your father.”

Earlier this year, the gay couple appeared in a Sabra Hummus commercial.

In a statement about the ad, Campbell’s Marketing Activation VP Yin Woon Rani, insisted, “This campaign holds a mirror up to the modern American family” because “people respond to brands that understand them and show life how it is, in all its glorious and joyous imperfections.”

And, as Cambell’s marketing team probably predicted, the media responded positively to the ad as well.

TIME magazine gushed over the “heartwarming” ad, while The Huffington Post promised the commercial would “melt your heart.”

Both Policy Mic and Mashable deemed it “adorably geeky.”

“It's adorable,” wrote Julie Sprankles for women’s site Bustle. “But it's also important and relevant. And maybe, hopefully, indicative that LGBT representation in mainstream advertising and media is becoming part of the norm — because as the ad's tagline says, this does represent ‘real, real life’ for so many families.”

But One Million Moms spoke out against the ad’s message.

The group, a division of the American Family Association, criticized the campaign for “aim[ing] to change the face of the American family” and “glorifying this unnatural marriage.”

“Companies should advertise the quality of their products,” One Million Moms argued. “It is no longer about the product but about their cause.”