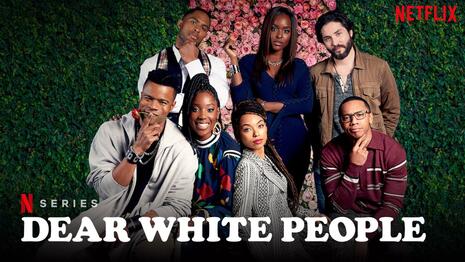 After four seasons of a Netflix show devoted to black college students telling white people how bad they are, it is time for graduation and the show to end.

The fourth and final season of Dear White People began streaming on September 22. The big controversy this season was over the Black Student Union (BSU) taking over control of the annual student varsity show, traditionally produced by the oldest cultural institutions at Winchester University.

A conflict arose for the BSU underclassmen from members of Black AF, a more strident activist group on campus. The varsity show was scheduled to be held at Beckford Hall, named for a slave owner. A freshman named Iesha (Joi Liaye) led Black AF in protesting the varsity show, calling it a minstrel show. Iesha fancies herself as the new Sam White (Logan Browning), host of the campus radio show, "Dear White People." Of course, in the end, the BSU made the show about protesting the school and renaming Beckford Hall.

Throughout the final season, the question was, where’s Reggie (Marque Richardson)? Each episode began with a scene from the future during a reunion of the circle of friends. The group wanted to know why Reggie disappeared after the varsity show. Reggie was a tech whiz and was being pursued by Silicon Valley. He rejected a big entry job offer and decided to devote himself to an app he was developing, The New Green Book. The app provided information on safe places for black people and alerts on suspicious characters, like white racists. Because supposedly nothing has changed since the Jim Crow Era.

As it turns out, in the last episode, titled “Chapter X”, the app helped Reggie save the life of his fiancée, Joelle (Ashley Blaine Featherson). At the end of the varsity show, the app alerted about a suspicious white man on campus. Reggie noticed the man approaching behind Joelle outside after the show. The white man pulled his gun and Reggie, a new gun owner, pulled out his own gun and fired at the man, killing him while protecting Joelle. The man turned out to be a white supremacist wanting to avenge his rejection by Winchester University back in the 1990s and blaming his failure to be admitted to the school on Affirmative Action. Reggie disappeared from the lives of his friends after that.

Somehow the lesson for Reggie was, "It’s no wonder that the forces behind American capitalism wouldn’t get behind an app for black people to track dangerous whites." Can you imagine that sentence with the races reversed? Just having a map that factors in where most crimes occur or showing mug shots is considered racist.

He later said at the reunion that he didn’t want to drag them into his drama and went into hiding because "white supremacists started using my face as a recruitment tool."

In a particularly ridiculous exchange, Reggie bemoaned his plight, "I was everything the gun-rights people said they wanted. A good guy with a gun stopping a bad guy with a gun." While Troy claimed, "But they weren’t there when the good guy’s black," implying gun rights activists are hypocritical racists.

The final season of the series is not its best. There are a lot of musical numbers, which make the otherwise tedious scenes move along. Ending the series with a violent white supremacist probably shouldn’t be a surprise. The whole premise of the show has always been that a young black woman needed to lecture white people on how bad they are.