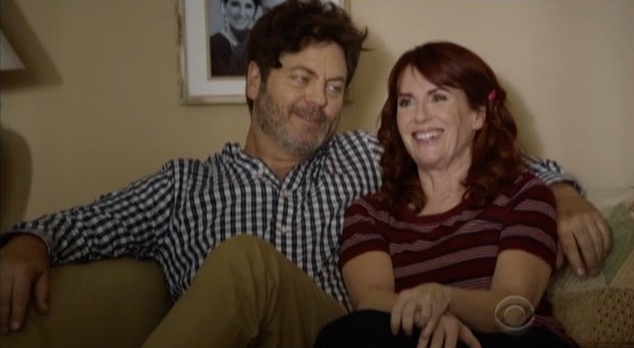 The season opener of CBS’s Life in Pieces introduces an odd new couple to an already odd family in the episode “Annulled Roommate Pill Shower.” Season Two brings us the “Uncle-Dad” from a brother and sister relationship.

Tyler (Niall Cunningham) and Clementine (Hunter King) announced that they had eloped in the finale of last season so this season begins with Tyler’s parents demanding the marriage be annulled. Heather (Betsy Brandt) and Tim (Dan Bakkedahl) think the 18-year-old kids are too young for marriage. But Clementine’s parents, Mary-Lynn (Megan Mullally) and Spencer (Nick Offerman), think the marriage is great. They also think being in a brother and sister relationship like a marriage is a great idea, too. Ewww.

Mary-Lynn explains that after Clementine’s father left, her brother Spencer stepped up and said he would help her with raising the children. He moved in and shares a bedroom with Mary-Lynn – twin beds, “like when we were kids,” he says creepily while they are cuddled on the couch together. Right.

Heather: I mean, as parents, I think we can all agree that, you know, two 18-year-olds getting married is a huge mistake.

Tim: Not as big a mistake as me trying parkour, but a mistake nonetheless.

Spencer:  We think it's great these kids got hitched.

Tyler: Thank you. It means a lot that someone believes in us.

Spencer:  Who are we to say what makes a family? I mean, people told us we would never work, but they were wrong.

Mary-Lynn:  So wrong. Just because we're brother and sister doesn't mean that we can't raise a family together.

Spencer:  I know what you're thinking. We don't look anything alike.

Mary-Lynn: Well, when Clementine's dad left me, Spencer vowed to help me raise the kids, and he's been there for us ever since.

Spencer: That's what family does. When your sister needs you, you step up and fill the hole.

Mary-Lynn: Oh, and he fills it. And then some.

Clementine: I love you, uncle-dad.

Heather: Oh... This is so... Sweet, uh, but they're just kids, so there's no reason for them to be married.

Tyler: There is a big reason. And it's getting bigger every day.

Heather: Why would you phrase it like that? I am in no way ready to be a grandmother. Mary-Lynn: Oh, I say, bring it on. I am ready for babies, babies, and more babies.

Heather: None of this is going to happen, okay? Because I made an appointment for you tomorrow so that you can get your marriage annulled.

Tyler: You can't tell us what to do anymore, Mom. We're adults. Now if you'll excuse us, we have to go meet our friends at the food court. Thanks for your support. Thanks for nothing.

Tim: So how does this work? Separate bedrooms, or...?

Mary-Lynn: Same bedroom, twin beds, yeah. Just like when we were kids.

Clementine calls Spencer her Uncle-Dad. It makes me wonder what kind of sick mind a person must have to come up with this storyline. Hollywood is determined to destroy traditional marriage at any cost - after all, "Who are we to say what makes a family?" - even to the point of an ambiguously incestuous sibling relationship.