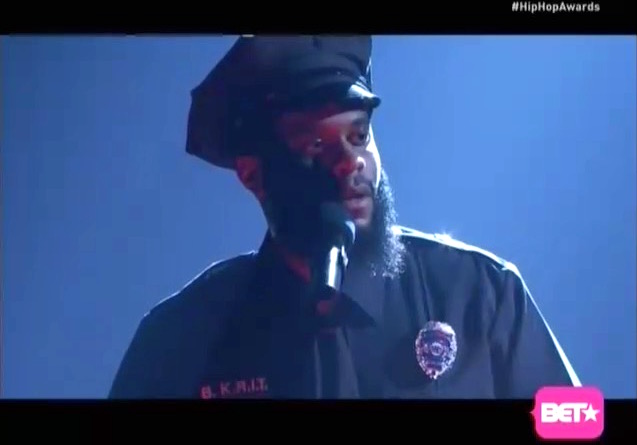 DJ Khaled hosted the BET Hip Hop Awards, which were recorded September 17, 2016, and aired on that network Tuesday night. He remarked the show would be about “real lyricists, talking about real issues.” As you might guess, the real issues were all about the election and Black Lives Matter narrative.

Shameik Moore, who most recently starried in Netflix’s The Get Down, kicked things off with a quick shout-out to President Obama and his family, including the dogs, with “We’re gonna miss you, Barack.” He went on to name the First Family and then encouraged the audience to “get out there and vote. Let’s not drop the bar, guys.” The bar? Statistically, black America has been far worse off in Obama’s America than in previous administrations.

Rapper Big Tigger drove the point home for the audience – get educated, get registered, use your power, get out and vote. During a lame skit promoting DJ Khaled condoms, a quick flash of a black man in a Dr. Ben Carson t-shirt and a man impersonating Donald Trump were shown on screen. The guy wearing the Dr. Carson t-shirt was asked, “Are you a lost soul?” Get it? Yeah. Young Empire actor Bryshere Y. Gray also admonished the audience, “Don’t vote for Trump.” And rapper LaCrea quoted the Trump campaign slogan "Make America Great Again" and asked, “When was America great?”

As promised by the show host, rapper Big K.R.I.T. delivered a politically charged message. It came in the form of a poem about “black folks dying” and charges of police brutality. Did I mention he was decked out in a police uniform as he delivered the poem? The audience responded with a standing ovation complete with clinched fists waving in the air.

Big K.R.I.T.: Mamas been crying, and they're gonna keep crying. Black folk been dying, and they're gonna keep dying. The police been firing, and they're gonna keep firing. The government been lying, and they're gonna keep lying. Propaganda news channels, that shit is all for show. Camera-phone videos is like all we know. Diluting what the eyes might really say. Because the whole world saw a murder yesterday. Now you're a county where it used to be. According to them, your eyes can't adjust to the violence that you used to see. Police brutality is all in your mind. And tactics that they use only look worse in rewind. People die every day, you should get used to it. Hands behind your back, face down, they still say, "You shoot." Can't breathe. Knee where your neck be like while you moving. Kids in your car headed home like what you're doing. Like why you telling? [Bleep] Your feeling. Why you smilin' when I'm so serious? I hate patrolling your space. Like why you living? Stop asking questions. Why you fear me? You look suspicious. I think you did it. Step out the car. Fit the description. Someone I feel, I need to kill it. Blood on the curb, I need to spilling. Another civilian, another not guilty. Another [unintelligible] Rap lyric. Another life gone. I can't forgive it! 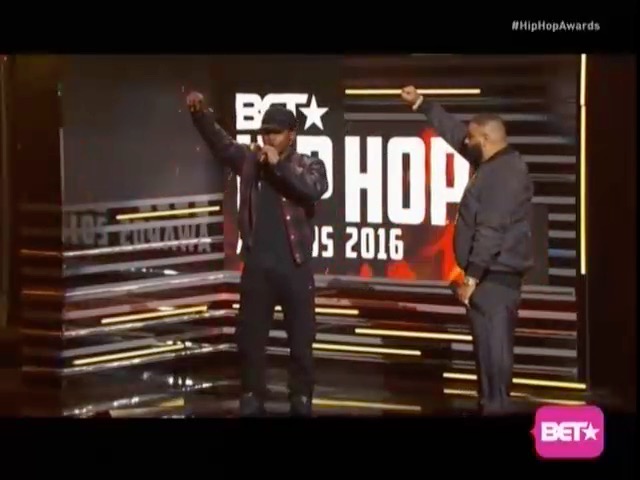 DJ Khaled: Because you know Sway got all the answers.

Sway: What up, BET? Shout out to King Tech, world-famous "Wake Up Show," Sway in the morning. Bet, this here is a celebration. We're celebrating the 50th anniversary of the Black Panther Party. Put your fists in the air if you got pride about yourself like this. Oakland, stand up. This year marks two decades since we lost our brother Tupac Shakur. If you love him, put your fist in the air like this. And in this country, ain't much changed since. But believe me when I tell you, bet, we are the chosen ones. Our voices are the loudest on this planet. We are at war, ladies and gentlemen. And there's no magic nor magician or no politician coming from the White House or otherwise that's gonna save us. We have to inform ourselves, love ourselves, prepare, and save ourselves. Do you hear me, BET?

Rapper Lockwood declared that black people can’t be racists and, with a nod to Crispus Attucks, rapped, “The first person to die for this country was a black man.”

The most elaborate act, though, was brought to us by the Atlanta rapper T.I. who was outfitted in some Black Panther garb. As he began to rap, words flashed on the screen behind him, like “murder,” and MLK, Jr. popped up in a photo with his arms raised – hands up, get it? Then white men in police uniforms appeared with black performers holding signs – Black Lives Matter. The “officers” poked the shoulders of the performers and they fell to the floor. Dramatic, right? 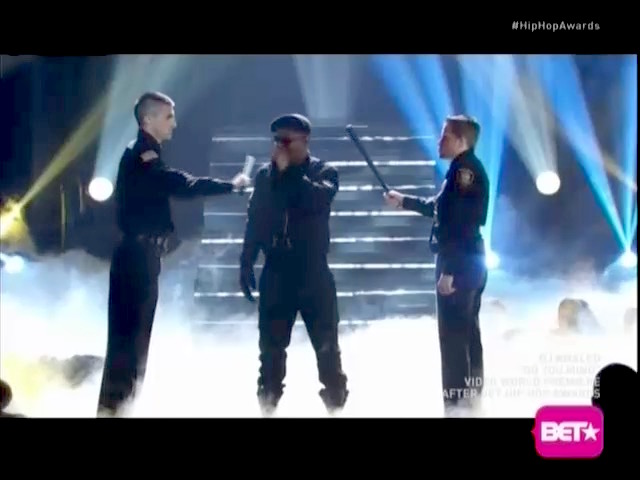 T.I.: No we will not. No we will not stand here. In silence. While they take the lives of our brothers and sisters. And partners. We will not turn a blind eye  to the murder with no repercussions. Oh no, we will not. We will not live on our knees. We will die on our feet. This ain't no lie that I speak. All you young-in's out here in the streets. Only wanna shoot people. Who look like you. You can stay home. You too weak. Oh no, we will not go. And repeat the mistakes of the past. Ignorin' the snakes in the grass. Payin' you cash. Still we pray and we fast .Til one day that's your ass. We will not ask for no war. No-no-no-no-no-no. But we will be prepared for one. Not with a gun. With the unity. Using the same shit you did to destroy me. We sick of the garbage. You kickin' and teachin' and lynchin' us. Lockin' us up for no reason. And Killin' us. No convictions, you serious?  Lyin' about what you show in the media. All the leaders. Who leadin' us. Leave us with ones. Who misleadin' us. Then go and reward. All the ones who mistreat us and leave us. In projects and give us these poisonous products on top of narcotics to push to our sisters and brothers. Like -- No we will not be run amuck. Led astray. Or bamboozled. The buck'll be stoppin' today. See what happen. When athletes'll no longer play for you. Tell them accountants to pray for you. On respect or just respect. What that paper'll do. Look up, it too late for you. Droppin' you off. Turnin' them profits to loss. When we won't go shop In the mall. United we all, stuck in this bullshit together. Showin' these folk we just won't take whatever. Or else they just roll up .And shoot up whatever. Just like they've been doin' forever. The -- swear they hard be huffin' and puffin'. But ain't gon' do nothing'. The enemy try 'em. They wait behind enemy lines. Why you tryin be so friendly now? Handle your business now and we won't fear nothin'. But judgement from God. standin' there lookin' at me sayin' you ain't do nothing'. I bless you when you  ain't invested in nothing'. Just kept up the cycle  of death and destruction ignoring your neighbor. Won't help him. But helpin' yourself. Just like the devil himself. Hmm Promote all that fornication  all that baby makin'. Ain't no baby raisin'. For a generation .Now they trapped in systems. 'Cause incarceration was inevitable due to education..Substandard institution. Never cared..J's drop, buyin' every pair. Crack rock, Crip, blood. All the 80. GDP and whatever else separate us. Hip-hop, king. You finally made it. Your time to take it. Pass Martin Luther. All that money. And you still blew it.  Didn't save. And you feel stupid. iTunes came. And they bootleggin' what you get for bein' hard headed. God damn.  Might as well gon' and go to hell cause I tried as hard as I can. I know you only a man. But God – Yeah. That way ♪♪

Hey United we stand. Look around. And see the power around you. We gotta stand together. It's us or else. It's do or die. The time is now. They can't kill us all.

The theme was police brutality against black people in true social justice warrior fashion. And the message was clearly to nag the audience into registering to vote and then voting for Hillary Clinton. If all the extra stuff was eliminated, the very few awards actually presented could have been finished in less than a half hour.