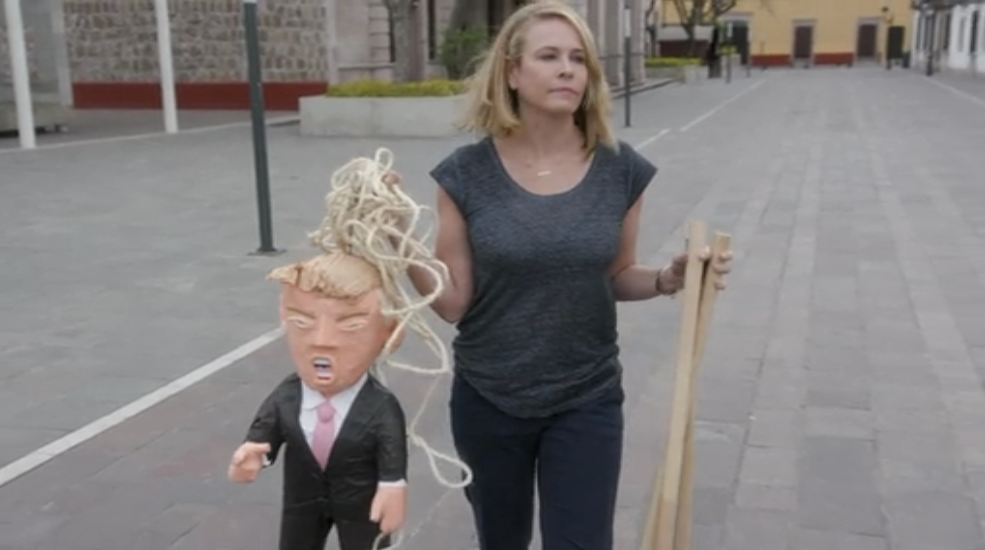 In “Trump Mania & Kegal Exercises,” Netflix’s Chelsea used three Mexican teenage girls – ages 14-16 – in her quest to regularly bash Donald Trump. The attack ended with Chelsea hoisting a piñata made in the likeness of Trump in public so a crowd would gather and help the teens smash it. Talk about overwrought aggression!

Chelsea sits with the girls in Aguascalientes, Mexico, under the pretense that she is going to different countries to find out what is on the minds of teenage girls and how they live. These girls have ambitions of being a lawyer, a doctor, and one just wants to be famous. All of them plan to come to America to pursue their ambitions.

When asked what they think of Americans, the chatty 16-year-old (who did most of the talking) said that they are “a little cold.” When the interview turned to sex – you knew it would, even with this age audience – Chelsea stated that “girls are having sex at a very young age” in America. The teens said that was not the case with them. On abortion, they all agreed they would not have an abortion if pregnancy was an issue. At this point, pro-abortion advocate Handler raised three fingers and declared, “I’ve had 3.” What a role model!

As Handler brought Trump into the conversation, the girls said they don’t think most Americans are like Donald Trump and that they don’t like him. Chelsea asked how his “anti-Mexican” language made them feel. If you are interested, it makes them “mad.” All three enjoyed taking whacks at the Trump piñata, as did some in the crowd that gathered.

Chelsea responds to @RealDonaldTrump's plan to build a wall around Mexico in a subtle, classy way. Just like Trump.https://t.co/Bjj8mPw3oo

The last guest on the show was failed MSNBC talk show host Keith Olbermann who was “inspired by the last piece” – the anti-Trump segment. He then asked Chelsea to take a “sanity test” as it would apply to Trump. The result? He’s a psychopath!

Not one mention of Hillary Clinton’s name in the show, though Handler is a very vocal Clinton supporter. The Trump bashing will be a continuing theme. Handler said, “If you had a soapbox, you’d use it, too. That’s what I’m going to do.”

Bonus footage of Olbermann demonstrating what it would sound like if his whale newscaster character on the Netflix show BoJack Horseman ever got "so angry he had to vent his blowhole:"