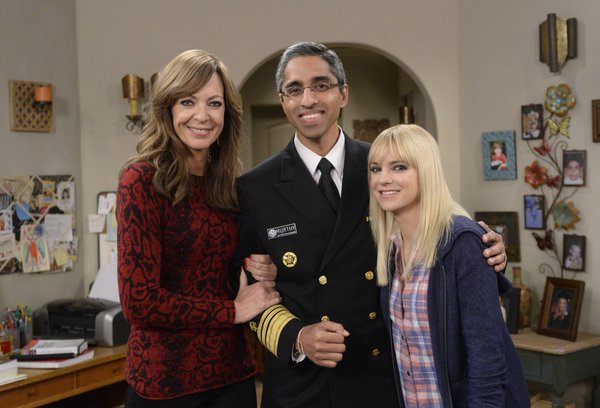 Mom – the CBS series devoted to tales of addiction and recovery told with an attempt at humor – deals with an unexpected death by drug overdose in “Diabetic Lesbians and a Blushing Bride.” The story ended in a Public Service Announcement (PSA) featuring the stars of the show and the U.S. Surgeon General, Dr. Vivek H. Murthy.

In the midst of celebrating Marjorie’s wedding to her Russian beau and the guest appearance of Rhea Perlman playing his sister, Anya, the serious subject of heroin addiction emerged. Anya is horrified hearing about Marjorie’s past homelessness and jail time. The vulgar humor of the bachelorette party thrown for Marjorie by the other women included a question and answer game where her troubled life as a heroin addict was revealed. Also, red velvet penis cake, anyone? “Who doesn’t like a red velvet penis?” “Diabetic lesbians?” How about some furry handcuffs or some sugar free strawberry lube?

Meanwhile, a young recovering drug addict, Jodi (Emily Osment), sponsored in AA by Christy (Anna Faris) begins dating a recently recovered addict, despite the objections and advice of the others in the group. Jodi misses Marjorie’s wedding – she is with the new boyfriend – and the show ends with a phone call from the police notifying Christy of Jodi’s death by heroin overdose.

Enter the U.S. Surgeon General. A 30 second PSA ran with Anna Faris and Allison Janney, who plays Christy’s mother, Bonnie, flanking either side of Dr. Murthy to encourage those needing help to seek it. It is the latest in the CBS Cares promotions.

Allison Janney: Addiction is an epidemic.

Dr. Murthy: Drug overdoses kill more Americans than car crashes. Today 120 people will die from a drug overdose. Behind these numbers are families who need our compassion and help.

Anna Faris: Because addiction is not a moral failing, it's a chronic illness.

Allison Janney: If you or someone you know needs help, please call 1-800-662-HELP

The death of Jodi was planned from the beginning of this season. The Surgeon General partnering with CBS promoted a much needed message, especially with the rise in heroin addiction. Kudos all around.