Jon Gruden is in some hot water for a bad football decision. 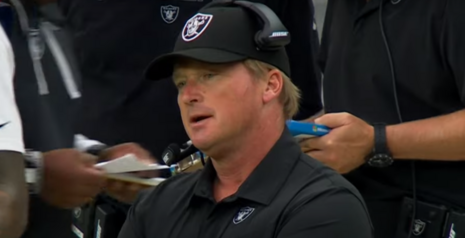 Reporters have come out that the former Las Vegas Raiders head coach nixed a deal that was negotiated by UFC President Dana White that would have sent Tampa Bay Buccaneers quarterback Tom Brady and retired NFL tight end Rob Gronkowski to the Raiders in 2020.

White told the story on “UFC 278 with The Gronks,” saying that Brady even went so far as to look for housing near Vegas before Gruden stepped in.

Here’s Dana White telling the story of Jon Gruden blowing up the Tom Brady and Gronk to the Raiders deal at the last minute. https://t.co/lNy2uV6XDG pic.twitter.com/Pje4DFA2ps

Gruden was in the news cycle last year after emails he sent with offensive language were leaked to the public. He was fired shortly thereafter.

Naturally, Stephen A. Smith had something to say about this on his show “First Take.” He and Michael Irvin both said that this incident should not be taken as a chance to dance on Gruden’s grave.

“I know that the emails we discovered were reprehensible, but the man worked here at ESPN for years and all of a sudden you’re gonna have people sit up there and say ‘he was a terrible, terrible person,’” Smith said. “No, that’s not what we got when we were working with Jon Gruden. I’m not gonna do that to him.”

“People will look at the Jon Gruden thing and say, ‘hey, that’s another bad decision by a bad person.’ I’m not calling him that,” Irvin said. “I’m just saying what people are going to say.”

While Stephen A. and Irvin often go off the deep end with regards to their takes on sports, this was actually a pretty measured take.

People or sports commentators should not use this as a way to continue to give Gruden trouble. Gruden’s football decisions should be kept separate from his reputation and he should not have to continue with being held responsible for those emails.