Most current and former NBA players have a shockingly low amount of common sense, but former Boston Celtics forward Enes Kanter Freedom is a welcome exception. 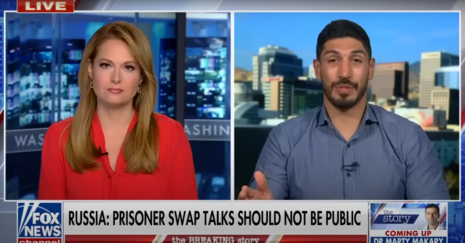 Speaking Friday afternoon on the Fox News Channel’s The Story with Martha MacCallum, Freedom explained that the United States should not even remotely consider the proposed prisoner swap plan for Brittney Griner and Paul Whelan, which involves releasing Viktor Bout back to Russia.

Bout is not just a random prisoner, but an infamously dangerous arms dealer who’s ruthless exploits include providing weapons to wars in third world countries. His dealings were so prolific he was given the nickname “The Merchant of Death.”

Freedom, like any human being with a shred of common sense, sees this proposed plan as foolish and potentially detrimental to the United States in the long run.

“First of all, you know, she pleaded guilty and the sentence is harsh, and of course, like everyone else, I want her to return back home because I know how the Russian jails can get tough,” Freedom said on the show. “I’ve been following her case very closely and the one thing that I will say, we cannot be sending a merchant of death. A person who is responsible for thousands of lives by selling illegal weapons in Africa, in Asia, and we cannot trade that horrible human being for her. It’s just not a fair trade.”

The government should fight to bring all imprisoned Americans home. But as Freedom said, if this is the price, we cannot pay it.