Every member of the Stanley Cup-winning team gets a chance to spend a day with the most coveted trophy in all of sports during the offseason. While most guys find ways to use it as a vessel for drinking an absurd amount of booze, Colorado Avalanche defenseman Jack Johnson used it for a higher purpose. 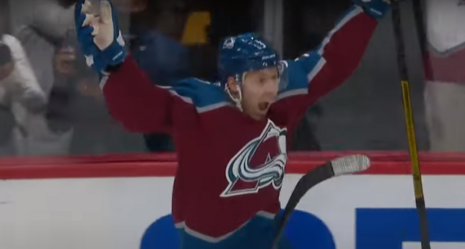 Earlier this week, Johnson used the trophy to assist in the baptism of his three children, with the minister performing the ceremony cupping water from the bowl of the trophy and sprinkling it on the heads of each child.

A tidbit from Jack Johnson’s time with the #StanleyCup: His three kids’ baptism was planned before the playoffs, and it turned out the date was Johnson’s day with the Cup. So the kids got baptized in the Cup itself.

Johnson had planned the date of the ceremony before the playoffs began, but thanks to some heavenly timing, the baptism was on the same day he got to celebrate with the cup.

Johnson certainly gets points for creativity with this gesture, but not for originality. Three former champions have used it for the same reason: Sylvian Lefebvre in 1996 (won with the Colorado Avalanche), Thomas Holmstrom let his cousin use it in 2008 (won with the Red Wings), and Josh Archibald in 2017 (won with the Penguins).

But that wasn’t the only purpose Johnson had in mind for Lord Stanley’s grand prize. Making good on a promise to his children, they went to an ice cream shop and ate some frozen creamy goodness out of the trophy.

“It was cool,” Johnson said during his visit to Dell's Ice Cream and Coffee in Powell, Ohio. “I promised my kids, gosh, I don’t know long ago, that if I ever won, we’d eat ice cream out of the Stanley Cup. I made sure with the keepers here [of the Cup] if it was OK to eat ice cream out of it and they said, ‘Yeah, have at it,’ so I was able to keep my promise to the kids.”

Even if the last gesture weren’t okay, I think a guy that has played for five different teams over a 16-year career would deserve a little special treatment.