English Soccer Team Gets Booed For Virtue Signaling In Poland 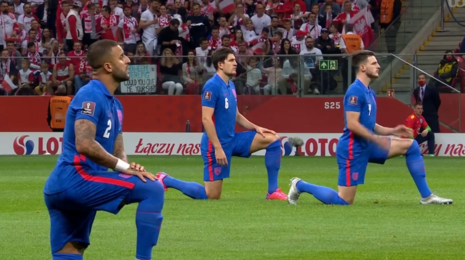 Plenty of athletes over the past year have kneeled to protest “racial injustice.” While this gesture of solidarity has generally been well-received, the English national soccer team was met with a different response on Wednesday night.

In a World Cup Qualifying match against Poland held in Warsaw, the Polish crowd showed their displeasure with England when they rained down heavy boos against the opposing side’s attempt to virtue signal when they knelt to end racism before the opening whistle.

Polish players themselves were not taking part in the gesture; however, all players pointed to a patch with the inscription “Respect” on their left sleeves, a patch that supposedly encourages players to respect their differences regardless of skin color. By doing this, the Poles showed while they weren’t physically kneeling, they were kneeling in spirit.

Robert Lewandowski and the Poland players pointed to the RESPECT badge on their shirts while some of their fans booed England for taking the knee before kick off. pic.twitter.com/xAjuBcBkfk

Even though the Poles showed their solidarity with the English side, give credit where credit is due. The Polish side took the smarter approach and stood until the match commenced. The Poles actions echo the sentiments of Zbigniew Boniek, the head of the Polish FA and vice-president of the UEFA, who openly criticized kneeling in the spring:

“This is clear populism because nothing is done because of it.”

Finally, someone in the sports world has a refreshing and fact-based take on kneeling.

Take kneeling for example. It is a noble intent to want to end racism, and it is wrong for humans to judge people’s character or value based on their skin color. But alas, people are evil and will continue to do this until the end of time, and it would take the removal of the wickedness of man’s heart and mind to do this (which will not happen this side of eternity).

By definition, this means that kneeling before a game, or during your country’s national anthem – Colin Kaepernick, anyone? – is not going to end racism. All kneeling before a game does is acknowledge that racism exists, and we don’t need a bunch of entitled, millionaire athletes, to remind us of that. The only thing that these protests have done is guilt white people into thinking they are the only ones capable of racism and further divide people into categories of oppressors and oppressed – which is textbook Marxism.

Boniek was right, kneeling gets you nothing but more arguments and conflict. Sports are supposed to be the opposite of that, a form of entertainment and camaraderie where people can bond over a common interest.

The sooner athletes across the world understand this reality, the sooner sports will become enjoyable to watch again. Until then, we will only see more of what happened in Warsaw.