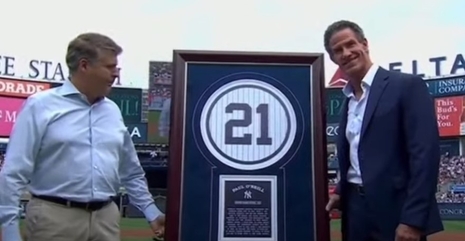 The YES Network broadcasts New York Yankees baseball games, but its public brand looks like a big fat NOOOOOO. This is the television outfit which has confined broadcaster and Yankees’ legend Paul O’Neill to his Ohio home since COVID hit 2 ½ years ago. He’s not vaccinated, and that’s still considered a problem by his neanderthal employer.

When O’Neill appeared Sunday at Yankee Stadium to have his No. 21 retired, the unenlightened NO folks and the team refused to allow him to approach the players. They could just as well have colored his shirt number and Yankee logo scarlet red.

Vaccines have proven unreliable, and if you don’t believe so, just ask President Joe Biden, who’s been vaccinated and boostered to the hilt, but still caught COVID twice. Or the CDC, which says unvaccinated people now have the same guidance as vaccinated people.

Just not at Yankee Stadium, where unvaccinated personnel are banned from interaction with players in the dugout and clubhouse. New York recently obtained the unvaccinated Andrew Benintendi in a trade, and he mingles with his new team. Team owner Hal Steinbrenner stood very close to O’Neill during the ceremony. Inconsistency is thy name.

O’Neill played right field for the Yanks from 1993-2001 and hit .300 or better in six of those seasons. Nicknamed the “Warrior,” the fiery O’Neill was considered the heart and soul of the Yankees’ late 90s dynasty. He was a batting champion and five-time world champion. His current employer and the Yankees are both positioned way out there in left field.

In his remarks during the ceremony, O’Neill fondly recalled saluting the “bleacher creatures” who cheered him on from right-field throughout his time in New York. There’s no saluting the vaccination creatures who now restrict his work environment.

Prior to Sunday’s ceremony, O’Neill declined comment on the vaccination controversy surrounding him. “I’d rather not discuss that,” O’Neill told NJ.com baseball writer Bob Klapisch. “Klap, I really don’t want to go there.”

Outkick’s Clay Travis tweeted CDC guidelines on vaccinations, along with this question:

The CDC has now ended all different treatments for vaccinated and unvaccinated people. So why in the world isn’t everyone who refused the covid shot being rehired with back pay?

O’Neill is back at home base in Ohio to call baseball games remotely for the network and team of NO.