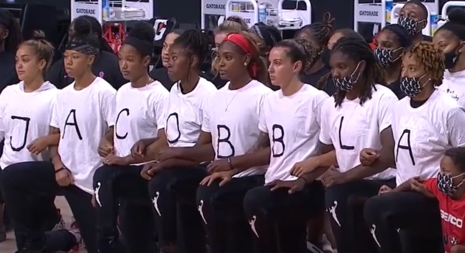 “Good news” for the Women’s NBA (WNBA) is the equivalent of appalling news for other pro sports leagues. Case in point, the Awful Announcing sports blog reported that this year’s microscopic television viewership was “more good news for the WNBA heading into the playoffs.” The truth is that nobody cares about this radical league and the fact that practically nobody’s watching proves it.

At the end of the regular season, the front end of a Sunday doubleheader between Minnesota and Connecticut attracted 682,000 viewers. The second game, featuring Seattle and Las Vegas, drew an average of 852,000 viewers – the league’s most-watched game since 2008.

Awful Announcing writer Joe Lucia raved that these figures could lead to even better viewing for the WNBA playoffs. The playoff television coverage on ESPN will also offer a real “nugget,” pregame shows, he wrote.

Despite the ridiculous hype by Lucia, televised WNBA games attracted just .001 percent of the American public this season. An average audience of 372,000 viewers in a nation of 330 million people is statistically insignificant.

With a strong LGBT-ISK3FG flavor, the WNBA has become one of the most woke, left-wing, unappealing professional sports enterprises in the United States.

This is also a league that adorned its courts with BLM and Brittney Griner decals. It named Griner, the Phoenix Mercury center imprisoned on drug charges in Russia, an honorary starter for its 2022 all-star game. Apparently, that's their idea of a 'heroic figure.'

In 2017, the Seattle Storm entered into a partnership with Planned Parenthood and gave the notorious abortion outfit some of the proceeds from one of its games. After the Supreme Court derailed Roe v. Wade this summer, in the Dobbs v. Jackson Women’s Health Organization decision, the WNBA complained that reproductive health should be protects.

All things considered, the WNBA continuously gives sports fans reason after reason NOT to watch its left-stained product.