It’s 23 days until college football season starts, and inquiring minds want to know who will make it to the postseason playoffs and who will win the Heisman Trophy, but a USA Today sports writer could not be bothered to address these or other, you know, football issues; he is way too busy spewing hot air about college football’s alleged greatest threat -- climate change!

If you want to actually reimagine the college football calendar, I’d start with the reality that extreme heat and climate change is going to have a major impact. But that would require vision and college athletics administrators really don’t do that 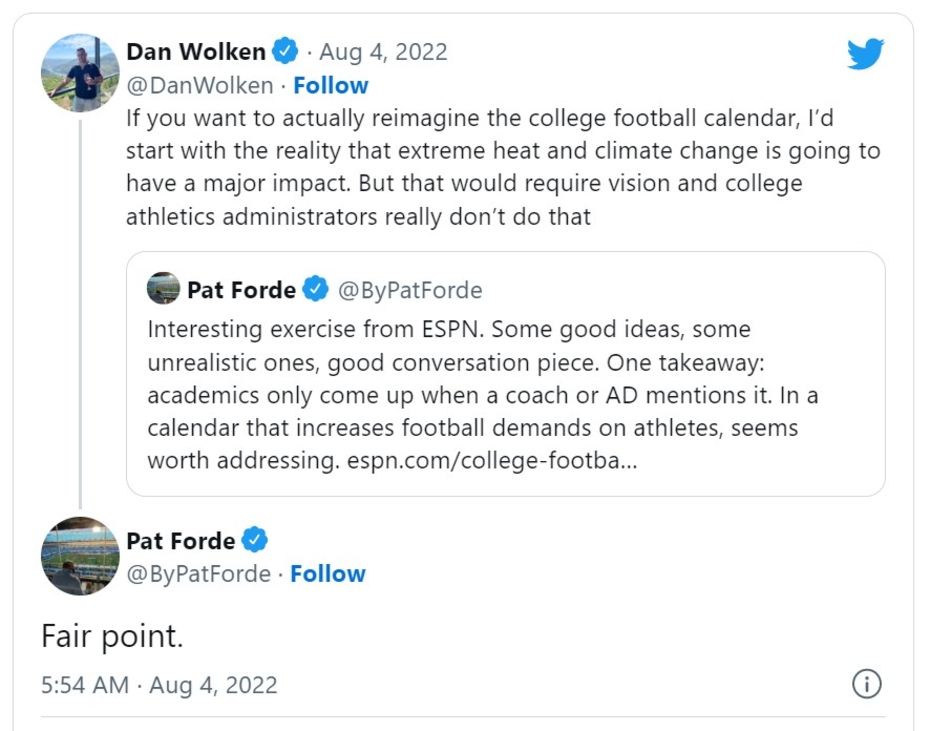 Wolken was responding to an ESPN story that reimagines the college football season. ESPN media recommended moving bowl games up to the start of the season and other changes to scheduling, the playoffs and recruiting. Sports Illustrated’s Pat Forde seemed to agree with Wolken’s idiotic assertion about football and climate change, tweeting a “[f]air point.”

Have these guys ever attended early-season football games in the Deep South with its high heat and humidity? The Arizona desert and Southern California with their triple-digit heat? The heat was brutal down there a hundred years ago, and it will be brutal there a hundred years from now. Carbon emissions have nothing to do with it either.

David Hookstead, an Outkick writer, poured ice on their hot air: “Imagine living life with this much negativity surrounding you. College football starts in 23 days and Dan Wolken and Pat Forde are out here talking about climate change.”

“(Alabama coach) Nick Saban is on the warpath after 2021, Georgia is looking to repeat, Michigan wants to go back-to-back over Ohio State, Wisconsin is trying to punch through and there are tons of other stories countless fans are debating, Hookstead suggested.

That’s not where Wolken and Forde are going, though. No, sir. It’s “Climate change, folks! Climate change is what football fans should be worried about,” Hookstead said of the SI and USA Today alarmists.

The rest of “rational America” is excited and pumped up, Hookstead commented: “If these two want to sing a sob story on social media, that’s on them!”