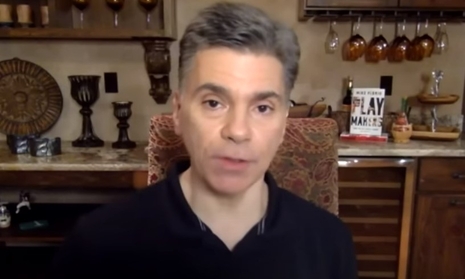 You know what this nation needs right now? To know what the National Football League thinks about the Dobbs decision. So says Mike Florio, the embittered voice of NBC’s Pro Football Talk. For some reason, the NFL's silence on things that have nothing to do with it really, really bugs him.

Florio says, “... the lines between God and Country continue to blur, as our democracy teeters toward theocracy. As our democratic utopia veering farther into authoritarian dystopia.”

The Constitution recognized abortion as a “fundamental privacy right for American citizens,” and with the stroke of a pen that was improperly taken away, Florio moaned in his post, “NFL stays silent on elimination of 50-year Constitutional right.”
Yes, he needs a sedative.
The wokesters of the NBA and WNBA issued obligatory statements about “reproductive health care” and women making their own decisions. Florio pressured the NFL for a similar statement, got no response and Florio is boiling over about its silence.:

“The NFL, which has spent considerable time and money in recent years attracting, developing, and expanding its female fan base, has been strangely silent on the issue. In all respects. There has been no statement. No tweet. No expression of support for the employees of teams in the 22 states in which the NFL does business, if those individuals must travel to other states in order to implement an intensely personal and inherently difficult healthcare decision.”

“The NFL likely prefers to exercise its right to remain silent on this issue because The Shield has become intertwined with notions of God and Country,” Florio continued.

Religious people (with their “raw profit motives”) don’t have to resort to abortion, and non-religious people should have the choice, football writer Florio says while straying way out of his lane.

He ranted there’s a real and present danger that paranoia and the push for theocracy will expand, what with support from Justice Clarence Thomas, who, by the way, had his seat on the high court derailed more than 30 years by Anita Hill’s sexual harassment claims against him.

Florio also blisters the “stick to sports crowd” because the NFL has been uncharacteristically silent since “a half century of settled law was crumpled into a ball and tossed aside ...”

Breitbart blogger Dylan Gwinn says Florio is off his rocker on several accounts:

The Supreme Court did not overturn Roe because of religion, Gwinn observed. “It overturned Roe because it’s not in the Constitution.” He’s right. The constitutional argument was fabricated by seven Supreme Court justices who rubber-stamped that myth in 1973. Florio is openly displaying his animus toward Christians.