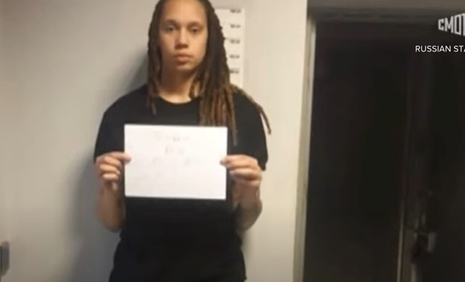 Wonders never cease in the wide woke world of the Women’s National Basketball Association. While doing time in a Russian prison on drug charges, Phoenix Mercury center Brittney Griner just made the WNBA All-Star Game as an honorary starter. Her initials and uniform number are adorning center court in each of the league’s 12 arena, too.

The 2022 WNBA season began May 6, Griner hasn’t played a single game, allegedly broke Russian law and has been in jail there since Feb. 17. Russian officials recently extended her detainment to July 2. No matter, she is being hailed by her woke American comrades as a heroin.

WNBA Commissioner Cathy Engelbert announced Wednesday, “During each season of Brittney’s career in which there has been an All-Star Game, she has been selected as an All-Star. It is not difficult to imagine that if BG were here with us this season, she would once again be selected and would, no doubt, show off her incredible talents. So, it is only fitting that she be named as an honorary starter today and we continue to work on her safe return to the U.S.”

Once again, merit means nothing to virtue signalers on the far Left. Symbolism trumps substance. A criminal record for a black lesbian athlete is now a badge of honor.

If law breaking is the standard, then it’s not a stretch to assume more honors will be directed Griner’s way. Will woke do-gooders who want to make themselves feel better start piling on the accolades for the 6-foot-9-inch basketball player?

Once freed and back in the U.S., will Griner be decorated with the Presidential Medal of Freedom?

Will she be selected grand marshal of the Rose Parade?

Which woke corporations will vie for her services as a product spokeswoman?

Why not just name Griner WNBA Player of the Year right now? She’s a perennial all-star, and everyone assumes she’d again be a dominant player in the league again this season. So why not just give her another honor she hasn’t earned by actually playing? Who cares about the grunts actually playing the game right now, spilling their sweat and giving their all? With her arrest record, Griner deserves all the accolades she can read about it in prison.

The Root’s Stephanie Holland parroted the Biden Administration’s words that Griner is being “wrongfully detained” in Russia.