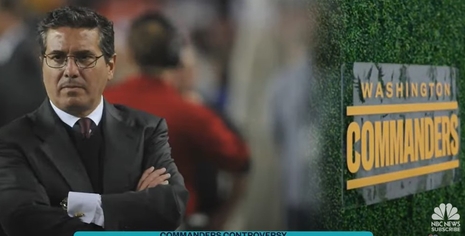 Watson has been accused of sexual misconduct by more than two dozen massage therapists. He has now settled with 20 of them. Previously, Watson offered his accusers settlements of $100,000 each. If this held through the actual settlement this week, that would mean he bought them off for a total of $2 million. The original accuser, Ashley Solis, and at least three others, did not settle with Watson.

Snyder’s sexual assault allegations reached all the way up to Congress today. The Washington Post is reporting details on his sordid behavior that were previously unknown to the public.

What a tangled, slimy mess it is indeed for the NFL.

NFL commissioner Roger Goodell testified before the U.S. House of Representatives' Oversight Committee Wednesday. Snyder declined requests to do so, prompting committee chairwoman Rep. Carolyn B. Maloney (Dem-N.Y.) to promise she will subpoena for Snyder to testify next week.

Goodell and Rep. Maloney sparred over her accusations that the league has not held Snyder accountable for Washington's slimy workplace environment. The commissioner said his league imposed "unprecedented" discipline on the Commanders for that environment.

Snyder has not been permitted to run the day-to-day operations of his team.

Maloney said Snyder and his team have not been properly disciplined for a “culture of widespread harassment.” Snyder was also accused of conducting “a shadow investigation to target his accusers, pin the blame on others and influence the NFL's own internal review." Maloney said an investigation "confirmed the Commanders secretly created lewd videos of cheerleaders for the private enjoyment of Daniel Snyder."

The Washington Post claimed Snyder’s pattern of sexual harassment goes back at least to 2009. Then, on a private team flight, he allegedly pressured an employee to have sex with him. He denied it, but months later, the team settled with her for $1.6 million.

Two years ago, the Post reported that a former Redskins’ senior executive instructed employees to tape a video for Snyder that would include partially naked team cheerleaders. Also in 2020, the Post published an article detailing the sexual harassment experienced in the workplace by 15 former employees. Another former employee told Congress that Snyder attempted to physically force her into his private limo.

Additionally, the Federal Trade Commission fined Washington $10 million for engaging in a “potentially unlawful pattern of financial conduct that victimized thousands of team fans and the National Football League.”

Some lawmakers have questioned the purpose of Congress becoming involved in the situation with hearings on a football team, but regardless of one's take, the league is still mired deep in the muck of all this scandal.

Michael Fabiano, of Sports Illustrated, said: “Regardless of the settlements, the NFL still looks bad if it doesn't ban Deshaun Watson for the entire 2022 season. Otherwise, it's ‘another rich athlete paying his way out of trouble" in the court of public opinion & another weak decision by the NFL pertaining to abusing women.’ “