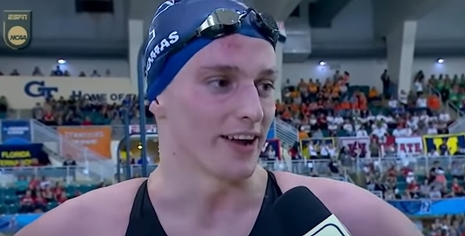 A former teammate of Penn U transgender swimmer William “Lia” Thomas asserted the controversial athlete is “mentally ill.” The anonymous Thomas critic made her remarks in an exclusive interview with Christopher Tremoglie of the Washington Examiner.

The ex-teammate was responding to an interview Thomas recently conducted with Good Morning America. The male swimmer, who was allowed to compete on the Penn women’s swim team during his senior year of college, said his so-called transitioning from male to female brought him true happiness.

The anonymous teammate scoffed at that remark in the Examiner interview:

"You can tell he is mentally ill. I saw the video and was so disgusted.

"Lia identified as a woman, but she is not a female. That is a fact. It doesn't matter how you feel."

Pressed to further explain her comments, the woman stated Thomas “was not grounded in reality and was instead so consumed with his own life that he failed to acknowledge any damage he inflicted upon his real female teammates.”

Additionally, the woman said Thomas damaged female sports and took away opportunities from real female swimmers – including Penn teammates and rivals from other universities. “Lia's experience was his alone, and many suffered so that he could benefit,” Tremoglie wrote in recounting her sentiments.

The ex-teammate of Thomas expressed how upset she was about his glib attitude about taking a woman’s spot on the team and the winner’s stand. She said multiple team members felt the same way.

Thomas is also faulted, in the interview, for his lack of empathy and concern for the women forced to sacrifice their rights and happiness. They were uncomfortable with a man in their locker room who flaunted his male genitals. They questioned why their happiness was discounted.

The interviewee continued listing her beefs with the whole charade that made Penn’s recent season a farce.:

"And to say, 'Oh, well, I am happy,' it is just so narcissistic. And to not even acknowledge how other girls might feel, it's selfish and disgusting.

"It proves that Lia only cared about prioritizing Lia's happiness above everybody else's. It's absurd. You don't have an argument as to why this should be okay."

“The sheer arrogance of Lia Thomas in this instance is something that should be noted. Lia may not have needed ‘anyone's permission,’ (to be on the women’s team) but that was only because those in charge abused their authority and suppressed the rights of college female swimmers and forced compliance. Thinking anything else is mentally ill.”

Penn U failed the women’s swim team members, Tremoglie writes. Women’s sports should be confined to females. “No amount of woke nonsense or pressure from the transgender supporters' mob should change this. The ‘experts’ were on the wrong side of history.”