Conservative Writers Nail It On Griner: Leftists No Champions Of Women's Rights 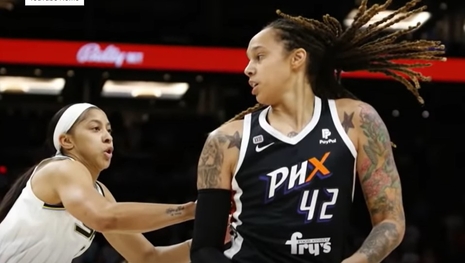 The “champions of women’s rights” aren’t all they claim to be, say two conservative writers today. Not when it comes to WNBA super center Britney Griner, who has been locked up in a Russian prison on drug smuggling charges since February. President Joe Biden, the Women’s NBA and the Left aren’t doing enough to help her return to the U.S., the critics charge.

Outkick sports blogger Gary Sheffield, Jr., says, “The WNBA and President Biden have done practically nothing other than slap logos on the court and start hashtags.” All 12 WNBA teams are planning to feature center-court logos of Griner’s initials and her uniform number in the next women’s basketball season.

“Griner’s supporters have had enough of the Biden administration’s foot-dragging,” wrote Warner Todd Huston, of Breitbart. He also noted a petition has been launched to urge the U.S. government to get serious about working for Griner’s release. The administration stated May 3 that Griner is being wrongfully detained; typically tepid language from a liberal administration that is typically weak on foreign policy.

Sheffield said there would be considerably more action by left-wingers if LeBron James was confined to a Moscow prison cell on charges of possessing hash oil, like Griner is. “The NBA would throw a fit and perhaps cancel games to assure his safety, and that’s probably how leagues should treat their most prized assets,” he claimed.

In 2019, President Donald Trump made sure the black rapper A$AP Rocky got released from prison in Sweden. “Trump took action to release a black rapper from prison, but Joe Biden tweets nice things about minorities — he’ll leave the black WNBA star in Russia, though,” Sheffield wrote.

Huston called it “outrageous” that the Phoenix Mercury star, a two-time Olympic champion, is under arrest for possessing vaping cartridges. It’s not like she was attempting to smuggle vast quantities of dangerous drugs, he added.

“It is also odd that the left-wing Biden administration is not trying to move heaven and earth to get a famous female pro basketball player back home,” Huston concluded.

Griner is a frequent critic of the United States, and Huston said that has made the pursuit for her safety “more complicated and polarizing.” The people she perceived as her allies, the so-called champions of women’s rights, have not rushed to her defense. Their inaction prompted the petition, which is merely giving those who signed it an opportunity to feel good about themselves.

Sheffield scored a slam dunk in his closing argument, writing, “Those people signing their signatures should demand for Joe Biden to step in. They’d quickly learn which party was founded on action and who’s more interested in optics.”