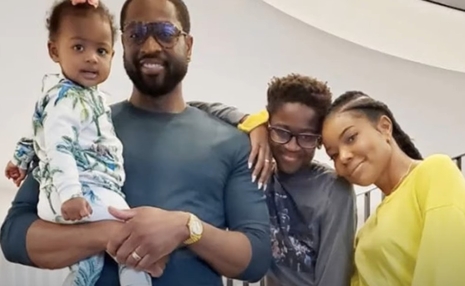 Dwyane Wade was an NBA champion and all-star who’s now in retirement and shilling for the LGBT agenda. His son, Zaya, announced at the age of 12 he was a “girl, but Wade is now saying he held his “daughter” in the hospital the day “she” was born. This startling contradiction of family history appeared in a Variety magazine interview Wednesday.

Wade also says Zaya actually knew he was a girl at the age of three. Even though children that young do not understand biology or know what transgenderism is all about. Also, he says, he was looking at his “daughter” when Zaya was born – 12 years before he came out to his family.

Papa Wade was slow to get with the LGBT program, but now he’s busy revising family and gender history. Of course, the left-stream media is not calling out Wade on his amazing and bizarre discombobulation of family history.

Speaking to Variety at the Met Gala, the former Miami Heat star said, “[Think of] the moment when you were in the hospital and you grabbed your daughter, and you looked at your daughter. All the things that went through your mind and all the emotions that went through your mind. And how much love fills your heart at that moment. Don’t let that ever leave you, no matter what.” Once again, Zaya was born a boy and came out at age 12.

Variety writers Carson Burton and Marc Malkin gushed about how raising a transgender child can be a learning process for adults who were not previously LGBT-savvy. Like Zaya’s parents. Thankfully, young Zaya is “offering advice” to parents Dwyane and Wade and actress step-mother Gabrielle Union.

Zaya (second from right in photo) is “now a notable young figure in the LGBTQ community,” the Variety puff piece states. Her parents of extremely supportive of “her.”

Wade refers to his children as his “mini-mes,” and says he tried to make them just like him. The kids will instead be who they are, and it’s the parents’ job “to help mold them and help try to push them in the right places that they want to go, but just remember that moment, what you said in that hospital the day that they were born.”

If that isn’t double-speak, I don’t know what is. In other words, the Wade parents are really just along for the children’s ride.

Wade has been criticized for his parenting ability; he recently posted a photo of Zaya kissing a trans boyfriend, and some responders said he’s failing as a father. He says the fight is “just being a father. Doing what you’re supposed to do as a parent is to make sure that you sit back and you see what it is in life that they want to do. …"

The confused Union and Wade are just “doing their jobs” as loving parents, they say. “And we believe them when they tell us who they are,” Union adds.

Zaya Wade has previously attended pride events, and Dwyane Wade publicly speaks out about the proper use of pronouns. Though he’s butchering biology, gender and grammar in the process.