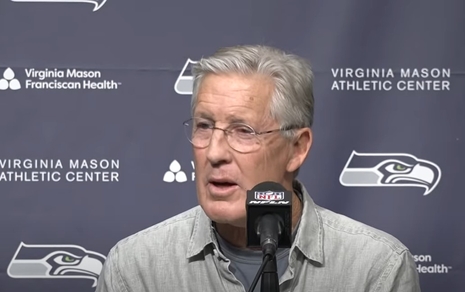 The National Football League has called for a diversity lite networking meeting May 23-24 that will exclude white people and limit the number of minorities allowed to attend. Each of the league’s 32 teams will be allowed to send one woman and one minority to the meet-and-greet opportunity.

NFL Senior Vice President Jonathan Beane, the league’s chief diversity and inclusion officer, issued a memo informing the teams about the event. He said it “aims to provide senior women and minority high potential coach or player personnel exposure to owners across the league to develop direct connections. Conversely, providing owners the ability to engage with new prospects in a natural and personal way without violating Anti-Tampering rule policies.”

The event comes a couple months after Seattle Coach Pete Carroll’s remarks last month (see above photo) that NFL owners should “stop living in their own universe” and get used to minority coaches that don’t look like them.

The league last week sent out a memo to all clubs announcing that 32 “diverse, prospective club-nominated head coach and general manager prospects will have networking opportunities with club and league office executives” at the NFL’s spring meeting May 23 and 24.

The 64 people attending the event will be selected by the 32 teams and will be individuals considered as having head coaching or general manager potential.

White people are ineligible to attend. Since the number of people each team gets to nominate is only two, that means other minorities may be excluded as well. Each team is basically going to rank its pecking order of diversity in determining who gets to attend the meet-and-greet and who doesn’t. So this is really more about quotas than about true diversity.

The Outkick blog contacted high-ranking assistant coaches “with aspirations of career advancement,” and an angry white coach criticized Coach Carroll for what his remarks set in motion.:

I’m sure Pete is coming from a good place. But I’ve never met an NFL owner besides the guy who signs my paycheck, and I’m not even sure he remembers my name all the time.

I’d like to network with a bunch of rich guys, too. But my understanding is Carroll didn’t suggest white guys like me could go hang out with these owners because I’m white.

Despite the controversy, the National Football League regards the upcoming event “as a positive step” and “part of its ongoing commitment to diversity of coaches and front office personnel …” said Outkick’s Armando Salguero.

Salguero also wrote that the NFL is hoping this attempt to promote diverse hiring for key positions will result in more minorities and women gaining powerful leadership positions.